Difference between revisions of "CTF-EternalCave"

Ruins belonging to an unknown race, acquired by Liandri Corporation’s Xenobiology Division for research and excavation. Deemed a ‘valuable and entertaining venue’ by the Tournament Board after 17 XD archeologists fell to their deaths. 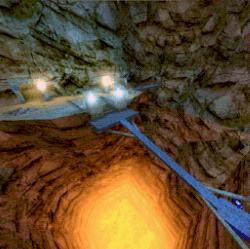 The creator of the map, Juan Pancho 'XceptOne' Eekels, has revealed that he wanted to create a map that is both balanced and non-symmetrical. After Eternal Cave was finished, he made sure it was balanced enough by letting bots play in the map for two days and comparing the score. Once the score was even enough, the map was declared balanced.