Difference between revisions of "ONS-Dria"

Set among the crumbling ruins of the last Nali fortress, these icefields were the final stand of the Nali against the Skaarj. Driving their Stone Giants before them, the Skaarj lay siege to the city for three weeks, at last breaking down the perimeter wall and wiping out all within for their effrontery. Now an arena of Onslaught, the vast range of this location will test the teamwork and focus of the very best.

Set on a frozen river on the surface of Na Pali, ONS-Dria's landscape is vast and barren. While the river "divides" the terrain vertically, a large wall does so horizontally, dividing the map into 4 sections, each of which has 2 powernodes with the powercores in the north-west and south-east sections. Distances are long and obstructions are few, making vehicles a necessity. Luckily, Dria boasts one of the largest arsenals in vehicles of any ONS map.

There are 2 ways to cross the river through connected powernodes. These cross near the center of the map near a pair of large, long bridge (the main landmark and chokepoint of the map). Although obtaining the powernode on the other side's riverbanks can give a fair advantage, it is not a guarantee to win the round. There's plenty more vehicular power at the various other nodes which which the disadvantaged team can fight back. 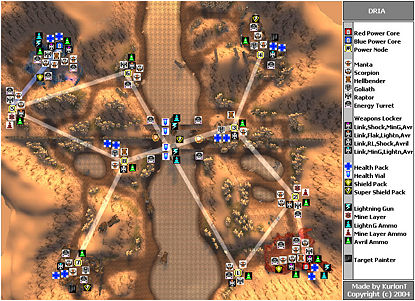 This section is a stub. You can help Liandri Archives by expanding it.
Retrieved from "https://liandri.beyondunreal.com/ONS-Dria?oldid=13327"
Categories: