(Redirected from T.A.G. Rifle)
Jump to: navigation, search
This article is a stub. You can help Liandri Archives by expanding it.

Introduced in Unreal Tournament 2003, the Ion Painter delivers a delayed but extremely powerful blast which appears to come out of the sky. The Ion Painter's strategic use is normally confined to blowing up objectives or crowds of unheeding opponents. 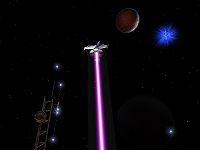 The Ion Painter can usually be found in maps containing the Ion Cannon satellite. When attempting to mark a location, make sure the satellite has a line of sight to it.

The Ion Painter seems innocuous enough at first glance, emitting a harmless low-power laser beam when the primary firing mode is engaged. Several seconds later, a multi-gigawatt orbital ion cannon fires on the target, neutralizing any combatants in the vicinity. The Ion Painter is a remote targeting device used to orient and fire the VAPOR Ion Cannon. The Ion Painter offers increased targeting accuracy via its telescopic sight, easily activated by the secondary fire mode of the weapon. Once the Ion Painter has been used to designate a target, it is highly recommended that the user put considerable distance between themselves and the weapon’s area of effect.

Unlike Unreal Tournament 2003, no Ion satellite needs to be placed in the map. Instead there must be a free line of sight upwards from the target location. Also, as a purely visual effect, there are up to three ion beams firing at the target location. The actual number of beams depends on the line of sight for the individual beams, but doesn't affect the damage output.