Difference between revisions of "Unreal"

Unreal is the first game in the Unreal series and was the first 3D venture by Epic Games and Digital Extremes. The game was approved by GT Interactive in 1996 and released on May 22, 1998 to the world, however by several accounts work on the engine actually started sometime around 1994. Unreal provided a single player experience along with a multiplayer mode that allowed for up to 16 players. It was rated 'M' for Mature by the ESRB for intense violence. 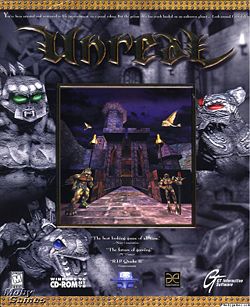 A short time later, Schmalz showed what he had been working on to Tim Sweeney, founder of Epic MegaGames (later renamed to Epic Games). Tim was impressed and began working on a level editor for Schmalz to use to build his engine. As time went on, many people became involved in the process. Some of the key people of the remote employees were Mark Rein which was brought in to do PR, Steve Polge that was hired to work on the AI and Shane Caudle who was called to make some of the game's maps. For a time, many of the people working for Epic were doing so remotely.

Originally the game was scheduled to come out in April 1997. A few months after this date slipped, pressure started mounting from GT Interactive to get the project completed. Epic moved all of its remote employees to Digital Extremes Waterloo, Toronto, Canada offices to complete the final push of the game. Roughly one year later, the game was released and its level of detail put video game publishers on notice: a new age of gaming had arrived.

A demo was alluded to many times by various people at Epic Games throughout the life of Unreal, however the only demos that were ever released came bundled with various hardware. Many people saw this as a negative to Unreal as there was no real way to try the game before you bought it. 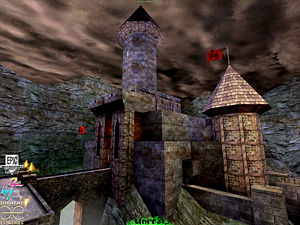 A full version of Unreal was released with certain S3 Video Cards to show off Unreal's S3TC capabilities. This version came with several S3TC showcase levels that can be found online.

A free trial of Unreal was released with certain Creative products to show off Unreal's EAX capabilities.

Unreal was given very good reviews and was generally accepted very well by gamers. However, shortly after the game's release it became apparent that the multi-player network code was not up to scratch for the 56k modem connections in wide use at the time. Due to this, the Epic MegaGames message board filled up with hundreds of posts of complaints about the poor quality of the Unreal netcode and the general need for a patch. This led to Epic's message boards being nicknamed the "Epic FlameBoards". In response, Epic released dozens of patches to the game, later including Direct3D and OpenGL support to the Software Rendering and Glide support.

Additionally there are some music tracks which were included in the game but were not used in the original game alone, such as "Opal" and "Morose". Some of these unused tracks were, however, used in Return to Na Pali.

It should be noted as well that the song "Isotoxin" is featured as the opening song of another game, called "In Pursuit Of Greed".

Inventory Items These can be picked up and then used during the course of the singleplayer game and a few are available in multiplayer levels. Use the bracket keys [ ] on your keyboard to select an item visible in your inventory icon bar. The currently selected item is bounded by a white box. Use the Enter key to activate an item. Activated items are highlighted in red. Press Enter a second time to deactivate an item.

Pickup Items Unlike Inventory Items, Pickup Items are activated or put into use as soon as you pick them up. For this reason, it is often wise to leave a Pickup Item on the ground and come back to pick it up when you need to use it.

Here you will find all the links to the downloads of the essential files for your Unreal installation (due to BeyondUnreal not supporting the Essential Files wizard any more. Note: you can still see the unsupported page here).