The Enforcer is a hitscan weapon, and one of the default spawning weapons of UT. When another player is killed and drops his/her Enforcer, another player may pick up that Enforcer and dual wield with that pistol and the one that the player spawns with.

The Automag is the first hitscan weapon that you come across in Unreal. In Unreal, the Automag has a clip of only 20 rounds and must be reloaded upon emptying. If the player so desires, he/she can reload the weapon simply by switching to another weapon and switching back.

The Automag is a pistol. It is equipped with a cartridge containing 20 rounds and can hold a maximum of 200 rounds. The Automag can shoot 20 rounds consecutively, after which it has to be reloaded. 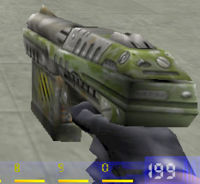 Primary Fire
Accurate but slow firing instant hit.
Secondary Fire
Sideways, or 'Gangsta' firing mode, shoots twice as fast and half as accurate as the primary fire.
Techniques
Collect two for twice the damage.
Trivia
When you have two enforcers in hands, your player model is still the same as if you are holding one enforcer only.
If you press the throw weapon button when you have 2 enforcers and pick it up again you will only have 1 enforcer.
The Enforcer, just like the Automag, was originally planned to be reloadable. But as all of the weapons in Unreal Tournament aren't reloadable, the function was not implemented and therefore the weapon's spread was increased to compensate this. The animations of the reloadable enforcer are still in the game and are used by a few mods.

The Enforcers are a starting pair of pistols for several characters.

Semi-automatic pistols which can fire an icy projectile to freeze opponents solid.

Semi-automatic pistols, which the Necris can manipulate to fire Nanoblack projectiles to stun their opponents.

Standard enforcer pistols, which the Juggernauts can fire in uncontrolled fully automatic bursts. 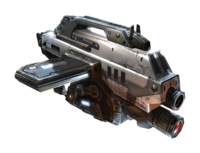 Shoots a quick, instant hit shot. It fires fast and with good accuracy.

A quick, three-round burst. The Enforcer will need a second or two to cool off afterward.

For decades, the Enforcer pistol was the combat sidearm of choice. Veteran soldiers appreciated the lightweight handgun's power, accuracy, and balance. In recent years, the ever-burning desire for greater firepower led to general issue of the AR770 assault rifle. Military procurement officers were drawn to the AR770's higher cyclic rate and underslung M355 grenade launcher, but seasoned combatants missed the dependability of the Enforcer. Axon Research listened to the soldiers, and their new Enforcer MP ('Machine Pistol') model provides the best of both worlds. Side-fed magazines provide greater capacity, while balancing the shooter's aim when wielding two pistols. With a deadly accurate semi-automatic mode, and a selectable burst fire mode, the Enforcer is back, and the modern battlefield will never be the same.