Difference between revisions of "Flak Cannon"

The Flak Cannon is a staple of the Unreal series and has been in the game since the very beginning. In general, the primary fire launches flak shell shards, and the secondary fire launches a flak shell bomb. The primary differences between the Flak Cannon's incarnations are the damage it causes, the number of times the flak shards bounce, and the distance the flak bomb flies. 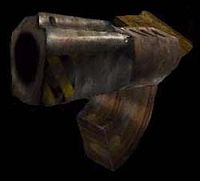 Primary Fire
White hot chunks of scrap metal spray out in a wide spread. (8 shrapnels shoot out per shot, each does 24 damage)

Secondary Fire
A flak grenade is launched out of the gun with a high arc, which will inflict 105 damage on impact in its center with an explosion and spawning 5 flak shrapnels.
Max Damage: 105(on impact) + 5 shrapnels * 24 = 225

The Flak Cannon is useful for close combat situations as well as bouncing around corners. 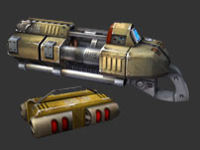 Primary Fire
White hot chunks of scrap metal are sprayed forth, shotgun style. The chunks glow as they do in UT, but they also create a trail of yellow behind all the chunks, making it easier to see. The damage they do goes down over their flight time, but a point-blank shot is extremely deadly. This fire mode fires 9 shards that do 13 damage each.

Secondary Fire
A grenade full of shrapnel is lobbed at the enemy, spraying shrapnel in all directions upon detonating. If you're luckily some of the shards it sprays upon detonation will hit your enemies, causing further damage. This means that sometimes you can kill someone with 100 health with a single flak shell even though the shell itself is only supposed to do 90 damage max.

Trident Defensive Technologies Series 7 Flechette Cannon has been taken to the next step in evolution with the production of the Mk3 “Negotiator.” The ionized flechettes are capable of delivering second- and third-degree burns to organic tissue and cauterizing the wound instantly. Payload delivery is achieved via one of two methods: ionized flechettes launched in a spread pattern directly from the barrel; or via fragmentation grenades that explode on impact, radiating flechettes in all directions.

With the absence of the Ripper from UT2003 and UT2004, the Flak Cannon's primary firing mode was given an extra boost in it's reflective physical properties.

According to information in Unreal Championship 2. The Flak Cannon was first employed against humans during the suppression of the Greens Word Rebellion.