The Ripper family of weapons are found in Unreal, Unreal Tournament, and UC2. 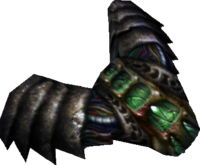 Primary Fire
Razor sharp titanium discs are launched at a medium rate of speed. Shots will ricochet off any surfaces for 6 times before disappearing.
Watch out for head shooting yourself!

Secondary Fire
Explosive discs are launched at a slower rate of fire.

Techniques
Aim for the necks of your opponents.
Shoot around corners if you suspect there's an enemy.
Good for quick defensive escapes when combined with the Bio Rifle; lay gooey minefield with Bio Rifle, and run away shooting razor discs around corners. 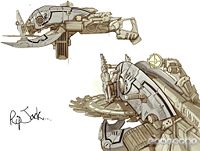 The ripjack is the descendant of the ripper and razorjack weapons from previous tournaments. The primary fire is a ricocheting saw blade that can remove an opponent's head on a direct hit to the neck.
The alt-fire spins the blade to increase its kinetic energy so that it will explode on contact. By holding the alt-fire for longer, the blade will continue to charge for a much deadlier explosion. While charging, the blade can also be fired as a proximity mine by pulling fire.

The Ripjack is the descendant of the Skaarj Razorjack and the Liandri Grand Tournament Ripper weapons. Like the weapons before it fires bladed disks as munitions.

The Ripper did not return in any later incarnations of Unreal Tournament and there was no replacement weapon. Instead, all remaining weapons were shifted down one inventory slot. This allowed the Sniper Rifle and Redeemer to have separate weapon slots.

It is possible to download an unofficial version of the Ripjack for UT2004. It works the same way than the UC2 version, but it is impossible to use the land mine function of the weapon. You can find the file in the FileFront.

The UT2004 mod Chaos UT2 has a similar weapon, the C.U.T.T.E.R.. Primary fire remained the same while secondary tilts the weapon 90° to the left before firing, causing the blade to shatter on impact, each fragment dealing damage to nearby targets.

There are various Ripper mutators for UT3, including Ripper Lite, which is a straight "carbon copy" of the Ripper.