The Gasbag is an alien species, either a native creature from the planet Na Pali or possibly artificially created through bio-engineering by the Skaarj race. Due to the places in which it appears, though, it is more plausible that it is native. It's round in shape, has two arms and several black eyes on the forehead. It floats around and moves through air. It's a common enemy in Unreal and Unreal - Return to Na Pali, where it's generally found in rocky terrain or stone buildings.

The Gasbag is about the same size as the player, but they may appear to be smaller due to their anatomy and their often-large distance from the player. This distance puts the Gasbag at a disadvantage because its flaming projectiles, though powerful, are very slow-moving. When the Gasbag is at close range, its projectiles are harder to dodge and it can use its fists, though its punches inflict little damage. The Gasbag therefore tries to approach its target while firing its projectiles and evading shots from the target. The Gasbag dodges projectiles well, so hitscan weapons are generally more effective against it.

The Giant Gasbag is a mini-boss in Unreal's single-player campaign. It appears only once in the game, at the top of the Nali Castle. As the name indicates, the Giant Gasbag is much larger than the regular Gasbag, at approximately three times the size. Its health, punch, pound, and projectile damage are also 2-3 times greater.

Much like the regular Gasbags, its main tactic is to hit the target from the air, using its powerful projectiles, while moving in to pound and/or punch the target. Spawning Gasbags is another one of the Giant Gasbag's main priorities, and it will often cease its attack briefly to spawn a new Gasbag. What this Gasbags wins in power, it loses in agility. Its inability to evade shots like regular Gasbags do, combined with its sheer size and the enclosed space in which it resides, make shorter-range weapons effective as well. Be sure to stay away from its arms though, as its punches are not nearly as harmless as those of the regular gasbag. 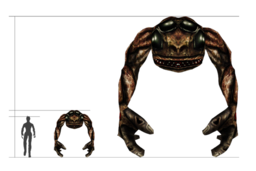