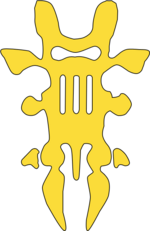 The logo of the Mercenaries.

Very aggressive; high agility; looter/soldier. Galaxy-roving bio-engineerd hunters with a lust for wealth.
There may be a humanoid beneath all of that circuitry, but the only way to find out is to blast your way through it.

Mercenaries are sentient beings which are mostly found in technologically advanced areas and factories. They first appear in "Terraniux". They are 6 feet tall on average and weigh 250 lbs. Prisoner 849 encountered them for the first time inside the Terraniux, a ship of the mercenaries which crash landed on the planet near Harobed Village. Some of them were captured by the Skaarj and brought inside the Mothership Lab.

It is possible that mercenaries compete with the Skaarj empire in their quest to extract tarydium on Na Pali. What they have in common is their disdain for the Nali - the natives from the Noork's Elbow village were found slaughtered by the mercenary forces.

Mercenary Soldiers are the most common of the Mercenary ranks. They wear brown armour, have purplish-lavender eyes (although it is possible that the lavender color is due to goggles) and have a machine gun/missile launcher mounted on their fore-arms. They are usually found talking in groups in/around the Terraniux and UMS Prometheus ships.

Mercenaries are equipped with a small Machine gun (which fires a few shots in rapid sequence) and a small Rocket Launcher. They can also activate a temporary shield which protects their whole body from any damage, much like the Shield Belt. Occasionally, some regular members will be able to fire through their shield, as well, so always be on your guard. Attacking with projectile weapons seems to increase the likelihood of a Mercenary activating its temporary shield, so stick to instant-hit weapons like the ASMD or Automag. The rockets are the most dangerous, but also the easiest to dodge. Try to avoid those while keeping the Mercenary under fire and it should go down without any problems.

As with most creatures, some Mercenaries are stronger than others. The main difference is the time needed to charge their shields. However, in The Darkening (inside the Skaarj Mothership, after Prisoner 849 destroyed the ship's main power source), 2 exceptionally strong Mercenaries appear (one Elite mercenary, and one regular) in one of the ship's rooms. The health of the regular one is 320 and the Elite's health is 390, and they can be distinguished from normal Mercenaries by their taller and more muscular appearance.

Mercenary Elites are one of Unreal's toughest foes. They wear blue body armor and have blue eyes (though it is possible the blue color is due to goggles). Their size is the same as regular Mercenaries, as well as their weapons and their damage, and they're found in the same places as regular Mercenaries. There is one particularly strong Elite Mercenary, found in The Darkening, as described above.

Unlike regular Mercenaries, Elite Mercenaries can fire their weapons while using the invulnerability shield. They will also use their shields more often than regular Mercenaries. The rest of their strategies and arsenal remains the same. The best way of fighting them is to take cover when they activate their shield, and then attack with a weapon like the Flak Cannon between shield periods. Even though projectile weapons such as the Flak Cannon are more likely to trigger the Mercenary's shield, it takes time before it can be triggered again, allowing safe use of the Flak Cannon and Rocket Launcher. 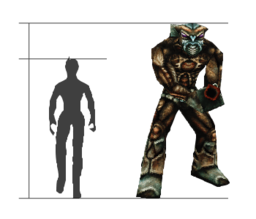