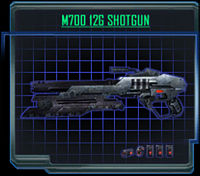 This gun is absolutely devastating at close range — perfect for clearing a room or taking out an enemy (or small group of enemies) right in front of you. Don’t use it at long distances, the effectiveness drops off quickly as the pellets scatter.

The M700 12G Semiautomatic Riot Shotgun, or the Crowd Pleaser, is a shotgun that appears in Unreal 2. It is unique in Unreal world as it has never been officially seen in any of other Unreal series games.

Primary fire
Shoots a single standard pattern-spread shotgun shell containing 16 pellets. At close range, it can do heavy damage and knock some enemies off their feet. 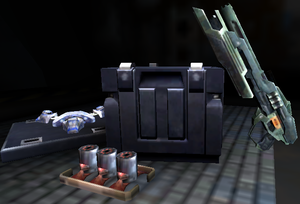 A Shotgun with its ammo and an energy pickup.

Secondary fire
Fires incendiary slugs that have a wider spread and a shorter range. They catch fire after some time, so this fire mode is capable of setting enemies on fire. This fire mode uses the same ammunition as the primary fire for game purposes; you don’t pick it up separately. This mode is slightly slower.
Techniques
The shotgun is useful only in close and middle range, but is very powerful. The secondary fire, being less accurate, is very helpful in distracting enemies. The Crowd Pleaser can be used this way: first, do a single secondary shot to set the enemy on fire, and after that use the primary fire until the enemy is conscious again, and if it's not down yet, light the enemy again. This doesn’t work against heavy-armored troops, though; they’ll just keep coming, even though they’re on fire. Also, make sure to use the primary fire mode for point-blank shots or you’ll incinerate yourself! As the weapon is given to John Dalton early in the game, it is often useful in the early missions, and even later in the game.