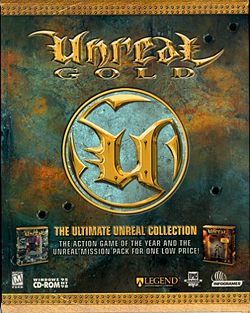 Unreal Gold was a re-release of Unreal that contained a patched version of Unreal along with Unreal - Return to Na Pali. The game was patched to version 226 and contained the Unreal Tournament UWindows interface. This version of Unreal was derided by fans of Unreal as it contained a patch that was not available to original retail owners. Shortly after Unreal Gold was released, a 226 patch was released for the original release. However, this patch was not well accepted since, though the Direct3D support was much improved, the network code was poor compared to the then very popular 224v patch.