This is Lhikaner speaking. I have Unreal Anthology and planning to get UT3. So far I have created the Article on the Kai, only so I can put in the screenshot.

I am about to embark on a flash movie that i'll call "A Mercs Life." It involves the Iron Guard team of Unreal Tournament 2kx, primarily revolving around Remus, his brother Romulus, and Sapphire. So far, this in an immage of Remus' head. All I need to do now is take as many screenshots of them as possible. The rest is being planned out in my head even as I write this piece of boredom. I also try to make make maps using UnrealEd 3, but every time I play it in the game the bots die right after they spawn (probably not a good idea to put the spawn points in the bottom of the map). It made my computer crash! 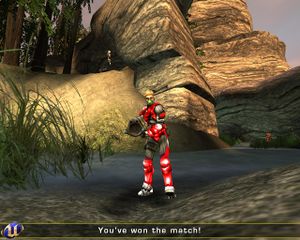 a screenshot of Remus

I also plan on adding a mod of flash characters of Newgrounds such as Alien Homonid, Pico, Tankmen, and lots more. I have no idea how to do that. But I know how to draw them and that's good enough for me for the time being. I'm guessing that's it!--Lhikaner 14:53, 5 June 2008 (EDT)