This was a work-in-progress replacement Link Gun page. The content has been sent over to that page.

The Pulse Gun's primary fire launches plasma projectiles at a rapid rate, and its secondary fire shoots a constant beam of plasma, though this beam is of limited length. The Link Gun is different from the Pulse Gun only in that a player may "link up" with a teammate who also has the Link Gun, by firing the beam at the teammate, boosting the teammate's firepower; the new name reflects this feature. Multiple players can link up to create a chain or any other (acyclic) arrangement of links for a greater boost.

The Pulse Gun's primary fire projectiles are green orbs of plasma, and they travel at a constant speed (?). The usefulness of the primary fire is generally limited to close-to-medium range, as is the case with most projectile weapons.

The secondary fire is much stronger. When fired, a straight beam of green plasma is emitted, and this beam grows in length. Though this length is limited, the beam is much more effective at medium range than the primary fire, owing to its hitscan nature.

The Link Gun's primary fire projectiles are normally green, and while their initial speed is slower than that of a rocket, they speed up to four times that in under a second. The usefulness of the primary fire is generally limited to close-to-medium range, since their slow initial speed makes them easy to react to at longer range. However, with a fire rate of 5.5 shots per second with 30 damage per shot, at close range and especially against unmoving targets the Link Gun primary fire is one of the deadliest weapons considering its raw damage rate (165 damage per second).

The secondary fire tends to be more used, however. Though the green wiggly beam is of limited length, since the beam is hitscan it is far more reliable within its range. 5.5 times a second the beam checks for a hit, and will do 15 damage to a target, which comes out to be 82.5 damage per second. Though it can be hard to master, in the right hands the beam is more deadly than the primary fire, especially considering its lockdown effect: whenever the beam hits, it pushes the target slightly, making it difficult for the target to dodge out of the way, effectively locking the player down. 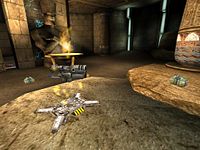 As with most UT2003 weapons, the UT2004 version of the Link Gun has remained largely the same, though it has received several subtle changes. The Link Gun's appearance has been altered. The primary fire now consumes 2 ammo per shot, and the secondary fire has a greater fire rate of over 9 hits per second, although the damage per hit has been decreased to 9 such that its rate of damage has been unchanged. In compensation for the increased ammo consumption rate, the ammo capacity of the UT2004 Link Gun has been increased.

In UT2004, players can also repair vehicles and Power Nodes with the alternate fire, greatly increasing the utility of this weapon in Onslaught, Vehicle CTF, and certain Assault maps.

The Link Gun returns in UT3, but as that is still unreleased, not much is known about its specifics. The Link Gun is now white, along with its plasma projectiles and beam. The beam is now curved, although it will still hit exactly where the crosshairs are aimed. Also, the primary fire rate has been increased.