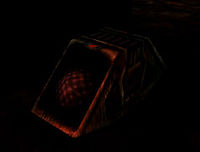 The VoiceBox is a rare Unreal inventory item used to distract enemies.

The VoiceBox can only be found once in the single player game, in Rrajigar Mine, and four times in multiplayer, twice in DmHealPod, and twice in DmCurse. A player can only carry one at time. When it is used, the VoiceBox is thrown on the ground, where it will emit various sounds, until it explodes harmlessly after a short while. Although it is useless in the single player game and Instant Action, as monsters and bots totally ignore it (since AI code doesn't take this into account), it may fool human players in multiplayer games.