Weapon lockers contain certain weapons and ammo and refill themselves individually for each player. A player can use a specific weapon locker only every 30 seconds or after respawning.

Lockers are mainly used in vehicle gametypes, like Onslaught, Assault, Vehicle Capture the Flag and Warfare, where players shouldn't have to worry too much about getting weapons and ammo.

UT2004 Weapon locker with and without new ammo for the player.

In UT2004, a weapon locker is a round stand with all contained weapons attached to it. There's a light at the top, which will glow green if the player can reload at the locker.

The weapons and the amount of extra ammo per weapon can be specified for each locker by the mapper. 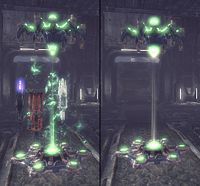 UT3 Weapon locker with and without new ammo for the player.

In UT3, a weapon locker has a solid base and top connected by an energy beam. Probably for performance reasons, weapons available in the locker are only displayed when the player is close enough and allowed to reload at that locker. The green energy cloud is also visible from further away if the locker has ammo available for the player.

The available weapons can be specified for each locker by the mapper, the ammo amount is hard-coded for each weapon.