The tournament organizers at Liandri have decided that the recreation of arguably the Earth’s most violent war would create the perfect arena of combat. Storming the beaches of Normandy in WWII was chosen in particular because of the overwhelming odds facing each member of the attacking force. Defending this beach, however, will prove to be no less of a daunting task. 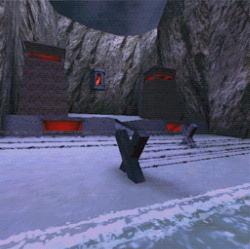 A map inspired by a real-life event, World War II's Operation: Overlord, it's a loose retelling of the event, Tournament-style.

The attackers start at the beach, where they're being attacked by several auto-cannons, mortars, and of course, the enemy team. Once they get past all of it, they must run over a U-shaped Entrance ramp all the way to the Boiler room. This room has a ledge where the defenders come from in order to stop them, and a ramp going all the way to the Ammo room. Another series of wacky turning passages finally guides the attackers to the main part of the map: the Gun cavern, where the long range cannon which must be destroyed is held. A series of ramps guide the attacking team to both the Defenders' ledge and the Control room whose controls must be destroyed in order to render the cannon inoperable.

The defending team starts at the Barracks, where they have several teleporters sending them to the key destinations of the map in no time, such as the foxholes holding the autocannons in the beach.

In order to disable the Long-Range-Cannon you must make your way through the defenders’ base to the large Gun Cavern deep inside the cliff wall. In there, you will find the ‘Main Gun Control’ room. Destroy the equipment in that room.