Without the pocket warm air venting from your thermal unit, your life expectancy is less than two minutes. Throw in a few hardened killers and some firepower and you can cut that number in half.

This map is the same as Unreal Championship's BR-Kalendra.

Inspired by the Canadian weather, it is no surprise that this map features dense fog and heavy snowfall. What's more surprising, is that it results in a rather cramped Bombing Run arena as well. The Ice Fields' rocky cliffs give shape to narrow canyons (for BR standards), and passing through them can be quite a task. There are a few shortcuts that can be used, as well as plenty of ledges, which add a bit of a Z-Axis to the map's gameplay. The Bomb spawns in the center region of the map, on a clearing. The teams must then pass through a series of canyons to reach the other team's base (which are both on open fields as well). The Goals are on the top floors of the bases and can be reached via an elevator. There is no terminal consequence for jumping through the goal in this map. 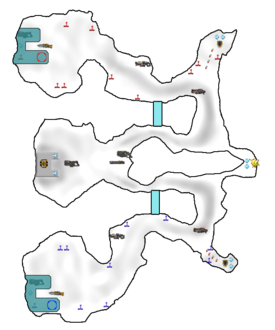 Humans as a group tend to exhibit strong parasitic tendencies, draining each planet of resources before moving to another. This disposable society contributes to the high rate of industrial decay on many colonial planets as factories are simply abandoned, and mines are left to leech poison into the landscape.

Contemplation of the moral implications of these practices is best left to philosophers, most of which were used for target practice during arena training. The League needs no moral high ground to stand on. What can be used, will be used.

Take, for example, the ice mining facilities of Alleria. The plasteel alloy used in the manufacture of mineral extraction processors is inexpensive and relatively disposable, while the iridium and other minerals hidden below the ice are not. Once an area has been stripped out of resources, it is often easier to simply abandon the mine and construct another elsewhere than dig the existing structure out of the ice.

Taking its name from the ice fields on which it was built, the Kalendra Iridium Storage Facility was designed with the purpose of protecting the valuable resources contained within its massive bunkers. Previous to Imperial rule the sector was known for violent raids by transport hijackers who felt that stealing the ore was much more preferable to digging it out of the ground.

The bunkers were built with raider attacks in mind. Facing each other across the valley floor, each structure was able to provide the other with cover fire and ground support in the event of an attack. This defensive strategy required attackers to divide their forces between both bunkers, weakening their position significantly. Now it provides the Tournaments with an excellent team-based arena competition that always ends with a bang.

A quick survey of the area offers a glimpse of hard snowpack spread deeply across the rocky surface, with steep ridged that form narrow trenches across the ice field. Bridging the trenches are several light-alloy trestles, allowing foot soldiers to move between locations without having to scale the slick ice of the trench walls. Before taking part in a competitive Bombing Run match, competitors should run through the Virtual Tournament Simulator to get a feel for the arena.

For those with an aversion to exercise, vehicles can be found in the rear hangar bays of the binkers, allowing combatants to rush the enemy with greater speed. The steep inclination of the terrain bracketing the lowlands limits wheeled vehicles to the trenches, so be aware that while you may be faster the enemy will have the advantage of greater elevation.

Once a competitor enters the enemy stronghold, they will have to make their way to the demolition target area, and plant the detonator. The odds will not be in their favor. Bets may be placed at the local League Recruitment Center, but take note of this friendly reminder, don't sign anything.