Unreal Championship, also known as UC, is the original Xbox game that Unreal Tournament 2003 was ported from in late 2001. The game made some heavy claims and lived up to almost none of them, such as having vehicles and supporting up to 64 players on one map. The game was released on November 12, 2002. 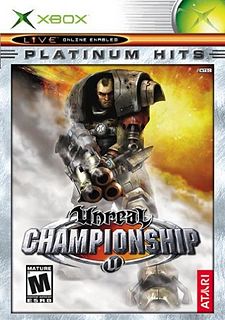 Unreal Championship began its life as a product of Digital Extremes. It was announced roughly a year and a half after UT was released. It was intended to be a more massive game with up to 64 players on one enormous map and including drivable vehicles. Neither of these features made it into the final game.

The game was not well received since it didn't offer many features that were promised, even though the game's box cover mentioned those features as available out of the box, or through future downloads. This disappointed many buyers.

The game's music was written by Starsky Partridge.

Well, to put the vehicles in turned out to be a massive problem for our memory budget, time constraints and simply the maps would have had to be pretty big for this to work properly.[3]

In addition, without having the technology for vehicles near the start of development; it was very tricky trying to design maps that were fun without being able to play them. So we put all the extra effort into single player and Xbox Live, rather than vehicles.[3]

Unfortunately, there are just too many cross-platform issues to consider to make user-made mods for UC a possibility.[3]

At some point, someone discovered that a player could lock onto another player and still remain locked onto that player while turning around or switching weapons. When the player did that and shot three rockets at another player in open areas, the physics of the rockets would malfunction and make the rockets move faster. If a player tried to dodge them, they would almost do an S-curve, swing back around, and hit the player right in the face. Many online players referred to this technique as "Rocket Whoring". It got this name because it could be exploited on servers with auto-aim disabled when using characters whose weapon affinity was the Rocket Launcher. The most typical character was "Memphis," which combined with the anuban class' air control boost, make the rocket glitch somewhat easier to dodge. There are an assortment of maneuvers a player can do to avoid being hit, but they are difficult and therefore annoying.

When Digital Extremes halted development on the game, the spammyness of the rocket glitch came to be considered one of the biggest reasons that the game's online community failed shortly after the patch was released.