The GES Bio Rifle (Green Exploding Shit) is a weapon that is present in all of the Unreal series games with the exception of Unreal 2.

The Bio Rifle has been a staple of the series and thus has remained unchanged for the most part. Primary fire will launch a series of small, green blobs which will stick to anything or explode on contact with another player, while secondary fire will gather the blobs into a much larger and usually slower-moving charge, but direct contact with a fully-charged shot is universally fatal, regardless of health and armor, and it is without question the strongest non-superweapon or non-vehicle attack in the series. 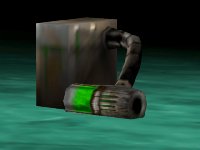 A testament to creative recycling, this weapon uses a volatile Tarydium waste for ammunition. The highly unstable nature of this waste makes the GES BioRifle more powerful than its Tarydium-loaded cousin, the Stinger. It also helps or hurts that this can be used as a mine, depending on who is standing on it.

Primary Fire
Tarydium sludge projectiles explode on contact with living tissue and adhere to most other surfaces for a short time before exploding.
Secondary Fire
Hold down the secondary fire button to launch a larger, slower, more powerful glob of sludge. The longer you hold down the secondary fire button, the larger the glob (up to 5 kg). Unlike later versions, the first GES BioRifle automatically fires when the barrel is full, therefore making the weapon harder to use.

Primary Fire
Wads of Tarydium byproduct are lobbed at a medium rate.

Secondary Fire
When trigger is held down, the BioRifle will create a much larger wad of byproduct. When this wad is launched, it will burst into smaller wads which will adhere to any surfaces.
Charged BioRifle (at least 7 ammo) is sufficient enough to kill a player with 199 health and 150 armor.

Techniques
Byproducts will adhere to walls, floors, or ceilings. Chain reactions can be caused by covering entryways with this lethal green waste.

In UT2003, the bio rifle is largely the same, but the damage of each shot was decreased while the fire rate has been marginally increased, the shot distance and speed is greatly increased as well as the charging rate, making it a slightly more reliable weapon. A fully charged secondary shot can still deal up to 250 damage, and will often leave a fully armoured opponent with just a few hitpoints left. The blast radius upon a direct hit is large, at about 380 units (compared to rockets/flak shells at 220, and shock combos at 275), making the weapon dangerous to the user at close range. 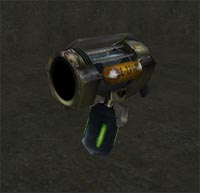 The GES BioRifle continues to be one of the most controversial weapons in the Tournament. Loved by some, loathed by others, the BioRifle has long been the subject of debate over its usefulness. Some Tournament purists argue that the delayed detonation of the mutagenic sludge, coupled with the ability to quickly carpet an area with the highly toxic substance, has reduced the weapon to the equivalent of a minefield, a barbaric and cowardly weapon employed during past human conflicts. Proponents of the weapon argue that it enhances the tactical capabilities of defensive combatants, allowing participants to cover multiple choke points more efficiently. Despite the debate, the weapon remains historically accurate, providing rapid-fire wide-area coverage in primary firing mode, and a single-fire variable payload secondary firing mode. In layman's terms, this equates to being able to pepper an area with small globs of Biosludge, or launch one large glob at the target.

UT2004's version tones down the distance of charged shots a notch, but it can still be very lethal. The distance a glob flies is based on the amount of charge in the shot - primary fire shots still go as far as they did in UT2003, while a fully-charged glob travels considerably less far. A direct hit of a fully-charged shot does up to 210 damage, an amount rivalled only by triple-stacked rockets and a well-placed shock combo, and easily enough to kill an opponent with maximum health or 100 health and 100 shield. This still leaves the biorifle an effective weapon against armoured opponents.

Primary Fire
Shoots globs of GES that stick to walls and floors and drips down from the ceilings. If another glob of sludge touches the first one, the two globs merge and form a bigger one. After a certain point, globs don't get any bigger and instead bounce out of the puddle.
Secondary Fire
Shoots bigger globs of GES that on impact breaks into several smaller globs that have the same specifications as usual slime globs. If the charged sludge hits the ceiling, the main part sticks to it and the smaller globs fall down instantly. 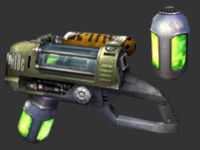 The bio rifle is the standard canister gun loaded with Tarydium ammunition. The Tarydium is processed from its stable crystalline form into a reactive biotoxic sludge. The primary fire shoots a semi-sapient blob that will pursue enemies at a limited distance. The alt-fire combines multiple canisters for a more deadly blob that can pursue opponents more vigorously.
After loading a full alt-fire charge, pulling fire and then releasing will detonate the blob in mid-air to generate a biotoxic cloud.

The UC2 version of the gun does a maximum of 119 damage when fully charged. Each individual glob does 18 damage (17 on the alt-fire) and when charged holds up to 7 blobs. The combo mode on the gun poisons the person it strikes and does 8 damage per second until the poison wears off.

Primary Fire
Fires individual blobs of toxic goo that bounce around and pursue the nearest player. If no-one is found, the blobs dissipate after about 10 seconds. The globs can be reflected, but it is very difficult to do so. Try to wait until they are at the top of their arc before performing a reflect.
Secondary Fire
Fires a large charged blob that splits into 7 smaller blobs upon impact. The large blob can be deflected if it is done in mid-air before it detonates. If the blob hits the ground, it bounces towards the nearest player just like the smaller blobs.
Weapon Combo
Also known as the Bio Mist Cloud. Press and hold the left trigger to charge up a large blob. When it is fully charged, pull the right trigger to launch the shot. Release both triggers at the same time to cause the projectile to release a large cloud of poisonous gas that persists for about 10 seconds. Make sure you wait to release the trigger buttons until after the blob is a fair ways away from you to prevent getting caught in the poison. This shot cannot be reflected. Has no effect against the Skaarj.

The GES BioRifle processes Tarydium from its stable crystalline form into a reactive mutagenic sludge. It can rapidly disperse these toxins for wide-area coverage, or fire a virulent payload of variable, but usually lethal, capacity. In layman's terms, this means the BioRifle can pepper an area with small globs of biosludge, or launch one noxious glob at the target. The BioRifle's ability to carpet an area with a toxic minefield makes it a notoriously effective defensive weapon.

Primary Fire
Shoots glowing globs of Tarydium sludge.
Secondary Fire
Loads up to 10 units of sludge, holding the large glob in front of the gun for everyone to see. When the glob is shot against a wall, some smaller globs splash away from it. If, however, the large glob hits a player, it will stick to him or her continuously apply damage until either the glob is used up or the player dies. In the latter case, the remaining glob explodes, causing additional damage to other nearby players.
Tactics
While goo sticks to someone, the player who fired the goo is credited with any damage the victim receives while the goo sticks to him or her. If you see someone "wearing green" in a deathmatch, consider not firing at that player until the goo is used up. If the player survives the goo, you get an easy kill, otherwise you wouldn't get anything besides wasting some ammo. (The person who shot the bio glob, in fact, will get credit for the kill even if your shot is the fatal shot.)
Reportedly, an interesting strategy is to drop a Stasis Field and fill it full of goo. By default, bio goo lasts for about 11 seconds, inside a Stasis Field it will last up to 8x that duration.
The primary mode can be very useful to annoy Darkwalker drivers from behind the billboards on DM-HeatRay.