The Stinger is a weapon found in Unreal and UC2. A similar version is also seen in Unreal Tournament 3. It was originally designed to be a mining tool by the Liandri Mining Corporation. The Stinger launches small tarydium shards to carve away unwanted rock. It was discovered to be a decent weapon, and put into military use.

Unreal Tournament 3 features a weapon called Stinger Minigun that is a hybrid of a Stinger and a Minigun.

This section is a stub. You can help Liandri Archives by expanding it.
Stinger 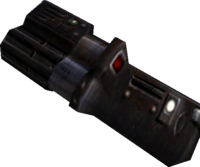 The Stinger's primary function is a projectile-based machine-gun, throwing out a steady and fairly accurate stream of blue tarydium crystal shards. It can also throw out a half a dozen shards in one wide-angle spread shot, doing medium damage at close range; unfortunately, this shot causes a significant delay before the weapon can be fired again.

The Stinger holds an interesting place in the arsenal of Unreal: as a rapid-fire weapon it's less powerful than the Minigun and can be harder to score hits with compared to that hitscan weapon; as a "shotgun" it's weaker than the Flak Cannon and tends to have a shorter effective range. Balancing this is its early availability and plentiful ammo in the original campaign.

The stinger is a Liandri mining tool that fires shards of Tarydium crystal. The primary fire shoots these shards at an alarming rate. Continuous fire causes the stinger to overheat, leading to a catalytic process that makes the Tarydium shards even more deadly.
The alt-fire shoots larger, semi-sapient shards that will veer towards a locked-on opponent.

UC2's Stinger is similar to that of Unreal, but has some added features. Holding down the trigger of the primary fire mode for a while causes the weapons fire to do more damage. The alternate fire mode launches shards to have limited homing capabilities. Like all UC2 weapons the Stinger does not have unique ammo, but uses the Energy Ammo type.

More information about it is in the Minigun article.