Return to Na Pali's version of the assault rifle is named the UMS Combat Assault Rifle. It is not known if it is a bug or it was planned to work that way, but RTNP version of CAR can fire from both barrels at the same time, that is, both primary and secondary fire at the same time.

Primary Fire
Fast machine gun fire that allows a fast kill against most enemies.
Secondary Fire
Releases five bullets that have not been ignited. The result is that on impact, which is almost instantaneous, the bullets explode, causing more damage than a normal shot from the Combat Assault Rifle. 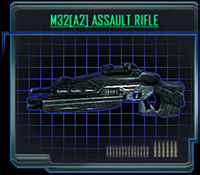 The CAR is the standard infantry weapon for the Terran Military grunt. Very effective overall — you can hose down an area using the primary fire mode or deliver a lethal single punch with the alternate fire.

Unreal 2 features a Combat Assault Rifle very similar to the one in Return to Na Pali. It uses reloadable clips and has to reload after some time, like all Unreal 2 weapons. It is also called M32 Duster to specify the model and prevent confusion. In the game, you will find a lot of ammo for this weapon, and as it can deal a lot of damage, it's an effective weapon all the way to the last mission.

Primary Fire
Fires bullets at a machine gun-like speed, killing most adversaries fairly quickly. As the rate of fire is 10 rounds per second, the primary fire eats ammo very rapidly. It is useful at medium and close range.

The CAR from the first person and third person perspective

Secondary Fire
Produces a slow-moving energy projectile that breaks apart on impact, releasing five shards bouncing off surfaces. Compared to the primary fire, the secondary fire is two times slower, but each used round does 4 more damage, therefore it uses a lot less ammo than the primary fire and deals more damage. This mode is useful in close and medium ranges and some times even in long range. It is very useful in corridors or other places with less space. At closer ranges, this mode usually a better choice for direct attacks since it knocks weaker enemies off their feet, can be fired quickly before you retreat behind cover, and can't be blocked by a charging Skaarj's arm blades (although it can be dodged). Bouncing it around corners is useful in many situations. It can be used to blow up turrets without exposing yourself to danger, and if you know where an enemy is, are fairly close, and have a fair amount of ammo, repeatedly launching grenades off walls to strike around corners is very effective.

The Assault Rifle in UT2003 has an extremely inaccurate primary fire and can hold up to four grenades for the secondary fire. By default the weapon comes with four grenades loaded, but competitive servers tend to give just one or two to discourage spamming. It shares bullets with the Minigun.

Unlike most missiles, grenades are influenced by the player's speed and direction. For example, if running forward while launching a grenade, the grenade will travel farther than if it was launched while standing still. Running forward and side-dodging allows players to launch a grenade across DM-Antalus.

Primary Fire
An inaccurate machine gun.
Secondary Fire
A grenade projectile that bounces around and then detonates.

Inexpensive and easily produced, the AR770 provides a lightweight 5.56mm combat solution that is most effective against unarmored foes. With low-to-moderate armor penetration capabilities, this rifle is best suited to a role as a light support weapon. The optional M355 Grenade Launcher provides the punch that makes this weapon effective against heavily armored enemies.

UT2004's Assault Rifle is very similar to UT2003's, but its ammo is separate from the Minigun's ammo.

Primary Fire
A slightly more accurate machine gun than in UT2003.
Secondary Fire
A grenade projectile that bounces around and then detonates.

Assault Rifles can be held akimbo, doubling the rate of fire and ammo consumption. Two full Assault Rifles give you enough grenades to destroy a Goliath. In team games such as Team Deathmatch, it is a good idea to give your Assault Rifle to newly-spawned team members to improve their chances of survival before they can get a better weapon. 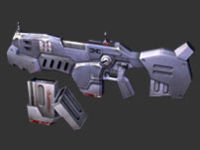 The Assault Rifle of Unreal Championship is intended to be identical to the UT2003 version, only has a different 3rd person mesh. The ammo pickup looks different as well and is more similar to the Clip pickup of Unreal Tournament's Enforcer.