Sanctuary, or Elara V, is the fifth planet in the Elara system, in the outer rim of human space. It is an uninhabited Earth-like world with a dense jungle covering. It features in the early missions of Unreal 2, set in 2251.

Though originally uninhabited, the Liandri Mining Corporation built a mining facility, called Lima Six, in the dryer regions of the planet. This facility consists of two main parts, an ore processing unit and a power plant.

According to employee Danny Miller Lima Six miners broke a drill bit on an alien Artifact buried deep within the planet. This discovery causes the re-emergence of the Skaarj who hadn't been encountered since 2219 and initiates inter-corporation warfare. 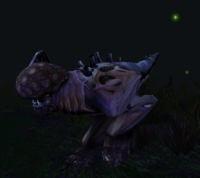 Rammer with fireflies in the background

The Rammer is a bipedal, reptilian animal with a large, armored forehead. It has no other limbs, but it has a tail and a number of spiky protrusions on its back. The Rammer lives in the planet's marshes. Normally docile, it will defend itself if attacked. Its presence can be detected by its mournful call, somewhat comparable to that of an Earth whale.

The Seagoat is a small, green, rabbit-like creature that lives in the marshes. It has a vertical mouth, two large, yellow eyes, and two curved antennae on top of its head. The Seagoat is docile, but will bite to defend itself when attacked.

Other animals on Sanctuary are the harmless cockroaches that are encountered around a corpse at the beginning of John Dalton's mission, which can be killed by simply stepping on them. Fireflies live in the marsh areas of the planet and can't be interacted with. 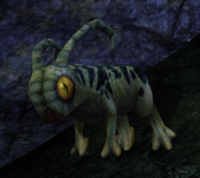