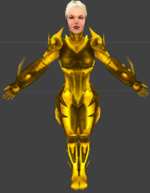 They [ Liandri ] defend their interests with an army of genetically engineered female warriors who have been raised since birth to be fighters. The Liandri Angels are cold, dispassionate, and highly efficient - they're among the elite of industrial mercenary forces.

The Liandri Angels are a strike force of the Liandri Corporation for solving real-world conflicts. They make their main appearance in Unreal II as the enemies of John Dalton on several missions.

On Kalydon, Liandri Angels are first encountered in Unreal II. It seems that they don't have any motivation to attack, but the assault was possibly due to the ship carrying a lot of the artifacts all the corporations wanted. Angels land on the planet with medium dropships in waves. On Janus, Liandri Angels also attack the facility in order to get the two artifacts in there. Here Angels are walking on a catwalk just outside the facility.

The Liandri Angels, just like the other forces in Unreal II, have three classes, Heavy, Medium and Light. They all seem to have biomechanical armor, possibly an early stage of Liandri's robot research.