Unreal II: The Awakening is described as a sequel to Unreal, though many of the story elements, including characters and locations, are entirely unrelated to the original. The game was released to stores on February 4, 2003. 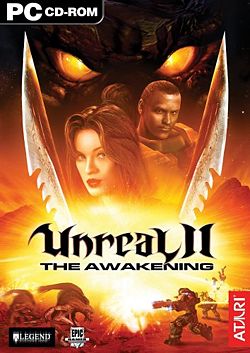 Primary development on Unreal II was performed by Legend Entertainment, with some assistance by Epic Games, and published by Atari.

After much delay, the Unreal II demo was finally released on May 1st, 2003. It included one level from the Single-player campaign.

The Demo for XMP was released on December 5th, 2003 and included one map, XMP-Garden, out of the 8 maps included with the XMP addon.

While Unreal II received above average review scores from most of the major game news outlets, it was not received well at all. The most common complaints were that, while it looked pretty, the game did not have much depth nor any replayability to speak of. The game did gain somewhat of a cult following sometime after the XMP addon was released, however this community focused more on the multiplayer aspect of the game, with the single-player campaign receiving very little time or attention.

Most people dislike Unreal II in name only. The game had relatively little to do with the original game, including leaving out any characters, location, and most enemies from the first game. Some people agree that the game is fine as a game, but is not by any means a sequel to Unreal.

Most of the music files of Unreal II use DirectMusic, and only the cutscenes use OGG Vorbis format. There are some additional music tracks that were not used in the game. Overall the music is very cinematic and uses much effects.

Note: they have .con extension and needs special software to play.

The base game of Unreal II is a single-player mission. A multiplayer addon was released in December 2003, known as XMP (eXpanded Multi-Player).

Here you will find all the links to the downloads of the essential files for your Unreal II installation.

Exactly a half of the game was cut from Unreal II. The content that was cut include:

However, this content isn't lost forever. Beta versions of Unreal II have survived, and eventually they will be released, bringing all of this content back into the main game.

An additional map has been created by Matthias Worch, called Solaris Base. The action takes place between Hell and Acheron missions.