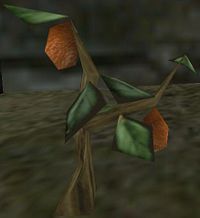 Nali Healing Fruit is a fruit with healing properties. It grows on small bushes on Na Pali and resembles Earths kumquat in shape, color, and texture. The fruit is named after the planet's natives, the Nali.

From the engine's perspective, the entire bush is considered a pick-up. If the player walks through a bush, he will pick the fruit and regain 29 or 30 of his health, unless his health is already full (100). The bush disappears after that.

It may also be found as a seed which the player can pick up and save for later. If the player is in need of health, he may plant the seed and watch a bush grow within a minute. While the fruit can be harvested while the plant isn't yet fully grown, it will not give the player as much health. Interestingly, it will grow on any surface, even metal.

Nali Healing Fruit is especially common in the single player game's first maps. It is referenced in notes found and deciphered with the Universal Translator. The Mercenary name for the plant, grown on their ship, the Terraniux, is Karkilys Zegnus.