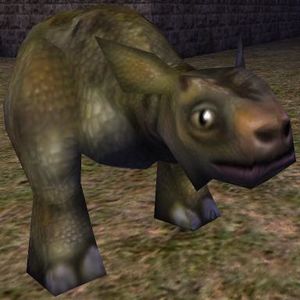 The Nali Cow is a bipedal animal native to Na Pali. It is named after its herders, the Nali, who use it as livestock and keep it near their settlements. It appears in Unreal and Unreal Tournament.

The Nali Cow is comparable to Earth's Cow, perhaps most clearly because of its mournful lowing. The Nali probably use it as a working animal. The cows may be used for their meat and to create leather, but the Nali's peaceful nature makes this somewhat less likely. The lack of a visible udder indicates the cows are not used for their milk.

In Unreal, Nali Cows are peaceful animals that appear as adults and smaller calves. They won't attack the player, even when directly attacked. Instead, the animals will panic and randomly run around. 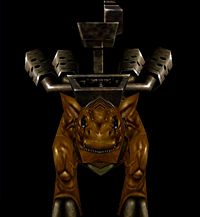 When the militant Nali were driven from their homeworld they brought the only domesticated beast they knew of- their local livestock. By using Pavlovian techniques and heavy cerebral modification they are training their cattle to fight instead of graze.

Nali Cows were introduced to the Liandri Grand Tournament as Nali WarCows by an militant branch of the Nali around 2293 (UT Bonus Pack 1). The normally passive creature's aggressiveness is modified and it is equipped with a harness to carry weapons. The Nali WarCows fight individually and apparently don't form a team. No further backstory was created.