This five-foot-long Rifle, commonly referred to as Sniper Rifle or Semi-automatic Assault Rifle, the "Pocket Howitzer" and sometimes a "Terran Trooper Rifle", packs an incredible wallop. Formerly used as a UMS Sniper Rifle for the UMS Marine Snipers, aswell as a main Trooper rifle for Vortex Rikers survivor Crews, it was useful for taking down enemies at long distances. Can cause head shots.

The original Rifle's alt fire was supposed to cause a multiple slug shot, but this feature was replaced by the sniper zoom, although the feature returns in Unreal Championship 2. When the zoom was active, a scope would pop out from the bottom of the rifle and would arrange itself on top of the rifle, but this animation was never originally used in Unreal. However, the animation appears in Unreal Tournament's OldSkool mod. 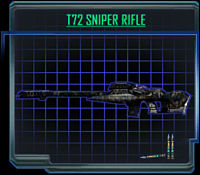 The T72 is a highly specialized weapon that should be used only for long-range sniping, but it does its job very, very well. Its targeting system compensates for wind and other variables to create an instant hit on virtually any target you can see.

The Widowmaker Sniper Rifle of Unreal 2 is the best weapon for long range in game. It is also capable of headshoting for extra damage. When the player is in the zoom mode, it is very difficult to see enemies coming from behind or the sides as they are blacked out. It is the most similar weapon to other Unreal series weapons from the Unreal 2 arsenal. The only changes are the clip usage and the zoom technology.

Primary fire
Fires a single shot.
Secondary fire
Toggles the scope on and off. The zoom, unlike the ones in other Unreal series games, is not controlled by the time you hold the trigger, but is controlled by the weapon scroll buttons. To zoom in, use the mouse wheel up, to zoom out, use the mouse wheel down. When out of ammo in clip and still using zoom, the view will automatically come out of zoom mode, play the reload animation and zoom in again (that's why it takes longer to reload while using secondary fire).

Primary Fire
Fires a high powered bullet. Can kill instantly when applied to the cranium of opposing forces.
Secondary Fire
Zooms the rifle in, up to eight times normal vision. Allows for extreme precision from hundreds of yards away.
Disadvantage: Unaware of close opponent(s) in zoom.
Techniques
Great for long distance headshots!

The sniper rifle was replaced by the Lightning Gun in UT2003 and Unreal Championship.

This high-muzzle velocity sniper rifle with a 10x scope is a lethal weapon at any range, especially if you can land a headshot.

Primary Fire
Fires a high velocity bullet.
Secondary Fire
Activates a scope allowing you to zoom in on your opponents.
Notes

The venerable Axon Research long-range target interdiction rifle is the weapon of choice for the discerning sniper. Acquisition of a target at distance requires a steady hand, but the rewards merit the effort: the high-caliber round is lethal at any range. With a precise headshot, the target will be neutralized by the super-sonic bullet long before they hear the report. As they say in the N.E.G. Marines: 'any shot you hear is nothing to be worried about.'

Primary Fire
Fire a high velocity sniper round. Hitting players causes 70 points of damage, a hit to a player's head, even when in open vehicles (Manta, Viper, Hellbender/Leviathan turrets, Hoverboard), causes 140 points. Power nodes/cores and most vehicles receive only 28 points of damage, but lightly-armored vehicles, such as the Manta, the Scorpion and the Viper receive 42 points. When fired, the bullet leaves a tracer, so enemies could see the sniper's hiding spot.
Secondary Fire
User-controlled zoom mode. Press to start zooming in, release to freeze zoom level, press again to disable zoom.

Though increasingly rare, the centuries-old Axon Research long-range target interdiction rifle is the weapon of choice for the discerning sniper. Its floating barrel and gas venting system minimize the massive recoil from its high-caliber projectile. The Tarydium bullet is uninspiringly conventional, but has proven its effectiveness in countless conflicts. Tournament management briefly switched to more efficient energy-based rifles in the late 24th century, but the angry response from both Tournament players and fans caused them to quickly overturn that decision.

Primary fire
A burst of three deadly shots. It seems to be similar to the originally planned Unreal rifle's alternative fire. Headshots might or might not be enabled when using this mode.
Secondary fire
Enables the sniper's scope and changes the type of fire. When zoomed, the rifle fires a more powerful round which is an instant kill on a headshot.