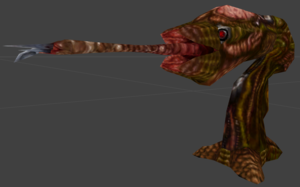 A medical station of the Striders.

The Striders are one of the three races dropped from the final version of Unreal 2: The Awakening, along with The Shian and The N. 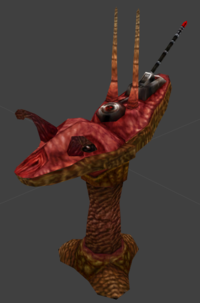 A proximity sensor of the Stiders.

The following is a description of the Striders as they were designed for Unreal 2. Although the Striders are mentioned in the game's background story and Epic's official Unreal timeline, it is unknown if the description should be considered canon.

Striders are biomechanical beings that grew their own armor and weapons. Individually a quite weak group of Strider Pods can combine to become a Strider Villain which is a much more formidable foe. Groups of Strider Villains can combine to become a Strider Nemesis which is much more powerful again. The larger Strider monsters can navigate around obstacles and through small openings by disassembling into their smaller components and reassemble on the other side.

Despite never seeing Striders in the game, they play an important role in the back story of Aida who ended the "Strider Wars" in 2241 at the expense of a civilian colony.

No concept art was released nor were any detailed physical descriptions given.

A few meshes have been left in the game though. They show Striders' equipment, which appear to be of biological nature. Stiders have their own Health Stations, Proximity Sensors and SFGs (?). The same static mesh package, VertexM, reveals that the Drakk, in addition to humans, may have been involved in the Strider wars. 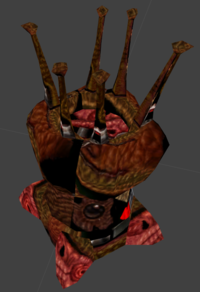 These quotes describe the Striders:

Biomechanical horros that not only grow their own armor, but their own weapons and spaceships. The worst thing about them is that they have the ability to disassemble, pass through tiny cracks or extremely narrow passages, and then reassemble on the other end.

Striders are biological creatures that not only grow their own armor but their own weapons and spaceships. Alone, the Strider Pod is not very threatening, however, if you group a bunch together they will create a Strider Villain. Group some Strider Villains together and you'll get a Strider Nemesis. What's cool about the Strider monsters is that it can navigate around obstacles and through small openings by disassembling themselves long enough to get though it, only to reassemble at the other side. How wicked is that?

The Striders are the most interesting of the new faces. Look at a single Strider and you might frown, even offer pity towards the biological deformity, but you'd send it to hell without a second glance. Come across a gathering of Striders combined into a Strider Villain, a vast organism that can grow its own armour and weaponry, and you're starting to realise what all the fuss is about. Run into a group of Strider Villains merged into a Strider Nemesis and you're despairing. By grouping together, it's possible for Striders to create huge tower-like structures capable of immense power and vast intelligence. And like the T-1000 unit in Terminator 2, if you try and escape from the Strider Nemesis, it can navigate around obstacles and through small openings by breaking down into its component parts and re-assembling.

The Striders grow their own armor, weapons, and even spaceships. One Strider Pod alone is not intimidating at all – a conical blob of goo on four squat legs that is dumb as a post and is armed with little more than serrated teeth. Unfortunately, the Pods will combine with each other to form the much harder Strider Villains. And multiple Strider Villains can clump to create a towering and lethal Strider Nemesis with dramatically increased intelligence and firepower. The larger Strider monsters can navigate around obstacles and through small openings by disassembling themselves long enough to get past or through.