A Light Drakk (in the pirst plan), Medium Drakk (background) and Drakk Droid (in cage) on NC962VII.

A mysterious race of ancient and extremely powerful insect-like machines, the Drakk are found near the end of Unreal 2: The Awakening. The Drakk homeworld lies in an uncharted sector of space, where every human expedition team was met with unknown fate. The Drakk are highly advanced and uses plasma and laser weapons, and can rapidly repair themselves. They also have the technology to preserve and animate parts of biological beings, which enables them to engage in cruel biological experiments on captured members of the other species, in an attempt to create the perfect soldier. Such experiments can be found in their homeworld, where Skaarj and Humans are being melted and kept in jails. The Drakk seems to be the guardians of a few Artifacts of Unreal 2, awakening when the protagonist tries to escape with one part of it; another Artifact is stored in the heavily defended center of the Drakk homeworld. 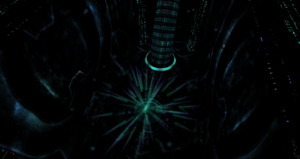 The actual Drakk population and populated space is unknown. They are only seen in Unreal 2 in two missions on two planets: Na Koja Abad, where they established a small defensive force around one of the Artifacts. Their primary world, or the homeworld, seems to be NC962VII. There are probably other planets that have been inhabited by the Drakk.

The Drakk were originally biological creatures. Unfortunately for them, they created such a high technology that it decided that their makers were more of a problem than help and destroyed all of the biological Drakk. Some Drakk might have turned cybernetic themselves. As the Drakk as machines needed repairs, they invented the Drakk Droids that primarily fixes broken Drakk. The Droids are well-protected as the Drakk can't let all of the repair droids be destroyed. If that happens, though, the Droids are regenerated by their own pods.

Since the cybernetic revolution, the Drakk terraformed their home planet and changed almost everything to look cybernetic, plastic or metal. They seem to like cyan, dark blue and black colors, while red is used to mark blocked entrances. High levels of radiation is found in their territories; the Drakk also tend to create statics that block radio signals - either by purpose or that is a form of their own communication.

The Drakk are known for their ultra-modern technologies. They use the innovative laser technology that is not usually used anywhere else and is highly effective, accompanied by the incendiary plasma usage. They are first seen using laser trip mines, on Na Koja Abad. The Drakk have pods that regenerate Drakk drones from scratch and containers that keep spare body parts alive. The Drakk also have some kind of an anti-gravity technology that lets them fly or levitate and helps to get to the higher parts of the world. In their worlds, everything is usually automated and doesn't need any attention, so Drakk usually rest in their pods. They extensively use electricity for all kinds of processes, although the source of it is not known.

Like most of the sapient creatures in Unreal 2, the Drakk have three classes: Light, Medium and Heavy as well as the non-aggressive Droids. Light Drakk are sometimes unofficially called Soldiers, Medium - Overlords, and the Heavy Drakk in the code are called Drakk Bosses.

Light Drakk are seen on both Na Koja Abad and NC962VII, though on Na Koja Abad they are the primary opponents. They are small and fast creatures that use their tentacles to grab the prey and electrify them. They have 400 health and tend to float around and dodge a lot. Hitscan weapons are recommended against them. Their electrical attack is not too dangerous though and they shouldn't be much of a threat - more a creature that eats a lot of your ammo.

Medium Drakk are primarily seen on NC962VII, but there is a strong one that was used as a boss creature on Na Koja Abad. They usually have 800 health and are bigger thus easier to shoot. They don't fly around as much as the light ones, but they levitate. Medium Drakk use the Drakk laser technology to defend, and probably for offense as well. They use blue laser to trace the targets while charging the primary laser. Don't wait if you see one pointing at you. The Medium Drakk usually live in odd pods that are usually in the ground and opens when the Overlord wishes to leave. Inside the pods you can find strange liquid that is very unhealthy for humans. There are usually more Medium Drakk than any of the other types of them.

The Heavy Drakk, or the Drakk Boss, is only seen once on NC962VII, but there probably are more on other planets of even the same one. It is not really a single cybernetic creature - it can disassemble to two different parts. They are called the Upper and the Lower parts of the Drakk Boss. All of them can fly. The Boss usually fights in the full form until is damaged enough to change tactics. This form uses a weak version of the Drakk lasers - they deal only 10 damage, but it is compensated by rapid fire. The full Drakk Boss can charge up to 8 lasers at a time and fire pretty much like the Cicada's alternative fire. The lasers get damaged and eventually - inoperational, when an amount of damage is dealt by the player. When all of the lasers fail, the Drakk Boss disassembles and the upper part files away while the lower part tries to hide. The top part has 6000 health and is equipped with a plasma spray, looking just like the Laser Rifle's alternative fire. It deals a lot less damage though, and seems not to have the incendiary effect. The upper part of the boss attacks with the plasma spray forming a whip-shaped stream of it that is very hard to avoid. The best way to do that would be simply hiding, but this attack isn't too tough. When the upper part of the Drakk Boss is destroyed, the lower part tries to regenerate the upper part. If the top part is not destroyed even after a long time after the start of the battle, it goes into kamikaze mode and explodes when it hits something - that way the lower part regenerates the upper one ever more swiftly. If the player gets close enough to the lower part, it can use a weak electrical attack pretty much like the Light Drakk do, but they prefer hiding. When the lower part regenerates the upper one, the Drakk Boss gets full again and everything starts over. When the lower part, having 4000 health, is destroyed, it starts spinning and after a while explodes, dealing no damage.

The Drakk are known to like experimenting with other creatures in order to create another creature that would have all of the best properties of each race used. The creatures that are being experimented on usually include lost creatures of expeditions to the Drakk homeworld, such as humans, Skaarj and Izarians. The experiments are held in hermetical containers full of some kind of a liquid that keeps the parts of the experiment bodies alive. Experiments that are more successful and can live without the need of this container are put into Sinister Orbs that Drakk use to test the experiments' abilities by using shock therapy. The excessive usage of the Orb is known to have very negative effects on the experiments though.

During his stay on NC962VII, John Dalton nicely described this experimentation:

What is this, some kind of a freak show?!