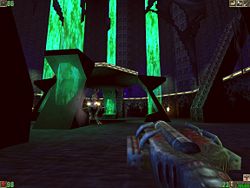 The Source is the thirty-eighth and final map in Unreal's single player game.

Author
Jeremy War
Description
In a gigantic cavern deep beneath the MotherShip, the Skaarj Queen lies in wait. Can the player escape the Nali planet with his life?

The Source Antechamber is passed. You have arrived in a strange dark place that contains the most horrific of all the Skaarj creatures - the Queen. The longest battle of all lies ahead!

You start at the bottom of the hole from the Source Antechamber. There's a door in front of you. There are similar doors on all four faces of this room.

Go through the door ahead, and through the door beyond that. You arrive on a metal walkway around a structure in the middle of a strange black void. There's a huge entrance ahead. But don't approach that entrance yet - go first clockwise round the metal walkway that skirts the room you were in just now. On the first straight, you will find four clusters of 40 Tarydium Shards. Further round, three Health Packs. At the back, an ASMD, an Eightball Gun, a Flak Cannon and an Assault Vest on an extended platform.

Continuing clockwise, four cans of Tarydium Sludge and four ASMD Cores. Finally, three boxes of Razor Blades and four cans of 12 Eightballs. Eventually you arrive back at the point where you joined this walkway. Approach the huge entrance now. As you get closer, you will see that the wall is encrusted with Pupae. Ignore them and approach the huge iris hatch that is the front door. Go through as it opens. Inside, you will enter a hall with a door at the end. Collect the crucial Super Jump Boots there - they have an unlimited lifespan.

You will need all these resources, because as you enter the room proper, you are spotted with roar by the huge Skaarj Queen. Use the Jump Boots to get to high ground immediately, because there'll be a stream of Pupae who come out at ground floor level as you fight (only one or two on the balcony and none on the central platform).

The best technique here is to stay on the raised central platform using the Eightball Gun, the Flak Cannon and the Minigun secondary fire. The Queen teleports all over the place normally, but when you're on the central platform there are only two places she can teleport to and it's easier to keep track of her movements.

Keep pummelling her with your weapons, avoiding her projectiles, but don't waste ammo firing at her when she uses her invulnerability shield. Pay visits to the main balcony for the health and the Shield Belt, keeping your Super Jump Boots enabled all the time, so that you can stay above the ground floor. Avoid the green energy streamers, they are deadly.

When the Queen is dead, an exit becomes unlocked at one end of the ground floor. There are doors at either end of this symmetrical arena, but the exit is easily recognised because of its pulsating yellow lighting effect. Approach it and it slowly opens. Go through, leaving the Pupae behind. Kill any that follow you.

Beyond, you are at a dock with a small rocket pod at the centre. An access tunnel extends to reach it as you approach. Your way off the planet at last! Go along this dock balcony and through the entrance on the left, then follow the corridor round and go along the access tunnel to start the ending cinematics.

The rocket lifts off and flies along a long tunnel through lots of special effects, eventually flying out of a hole in the top of the MotherShip and up into the sky. In orbit, it slowly comes to a halt. The following text appears on the screen:

The Skaarj escape pod has broken free from the planet's gravitational pull... barely, Yet its fuel is depleted and you drift aimlessly.

From where many have died, you have escaped. You laugh to yourself: so much has happened, but little has changed.

Before the crash landing, you were trapped in a cramped cell. Now, once again you are confined in a prison.

But, you feel confident that someone will come upon your small vessel... eventually.

Until then, you drift and hope.

Congratulations, you have beaten Unreal!