The UMS Bodega Bay is a Unified Military Services, Freeman-Class Cruiser. Assigned to find the wreck of the UMS Prometheus, this ship was patrolling the asteroid field above Na Pali. It was then, that the cruiser picked up the Skaarj Mothership Escape Pod. On board the shuttle was Prisoner 849, of the UMS Vortex Rikers. 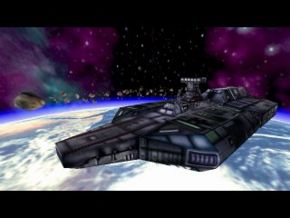 The UMS Bodega Bay, moments before its destruction.

The Bodega Bay sent the Prisoner to the planet surface to recover the Data Cores from the Prometheus. After she reached the Communications Room of the crashed vessel, she intercepted a transmission between Starlight Base and the Bodega Bay. She was to be executed after Operation Talon Hunter was complete.

Once the transmitter was activated from the bridge of the Prometheus, nine Marines were sent to execute her. They were eliminated by Prisoner 849. Several days later, the Prisoner reached the shuttle but was intercepted by the Bodega Bay. The enormous cruiser fired upon the shuttle, it dodged the missle and hit the Bodega Bay on its Port Bow. The Ship is believed to have crashed on the planet.