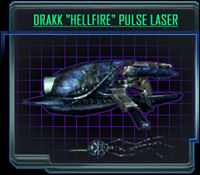 I put this thing together from bits and pieces you found in the labs on Na Koja Abad. It uses a proto-Drakk pod for ammo, and its primary fire is a laser pulse -- sorta like a conventional railgun. The Alt-Fire is a limited range sustained beam you can use to hose down a roomful of bad guys.

The Drakk Laser Rifle (also known as Drakk Pulse Laser or Hellfire) is a weapon featured in Unreal II: The Awakening. This weapon was invented by Isaak from the parts of destroyed Drakk. The weapon is available starting from NC962VII mission. Since Avalon this weapon is upgraded and has an alt-fire. It didn't have it earlier because that fire mode is not found in regular Drakk technology, only the heavy Drakk can use it. The weapon is very effective but the clip holds only a few shots and the reload time is very long. The Laser Rifle is an exclusively Unreal 2 weapon - it is not even featured in XMP. 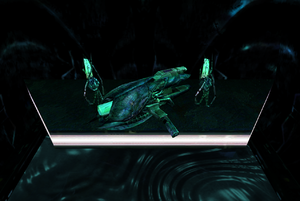 The Laser Rifle with its ammo.

Primary fire
Shoots a thin red laser beam that lances any opponent instantly. This mode deals loads of damage but it's spread is very small so you need to aim closely to hit the opponent. This fire mode takes 5 units of energy from the Laser Rifle pod instantly, therefore when using only this fire mode, you will only be able to shoot 5 shots before reloading.
Secondary fire
A long red whip of incendiary plasma that fries opponents. As any other incendiary attack, this can be used to distract enemies. This attack is similar to the Link Gun's secondary fire. If the plasma touches wall, it adheres and after some time bursts into flames.
Techniques
As the Laser Rifle is only available in the last few levels, you will be usually battling Drakk with it. It's the primary option as Drakk drop a lot of Laser Rifle pods. On lower difficulty levels, a medium Drakk can be killed from 2 shots of the Laser Rifle, and each of them drops a Laser Rifle pod that gives 25 energy units - enough to compensate the fight. On next levels, like Avalon, you are also allowed to use the Laser Rifle, but these levels have only minimal supply of ammunition. In bot matches, the Laser Rifle is a great all-around weapon that can very easily kill an opponent with the primary fire, even if it has slightly damaged light power armor on. The secondary fire can be used to lay traps, but bots rarely fall for that and using the alternative fire there is recommended only if the enemy is very near. Also, always keep your eye on the ammo meter as reloading a Laser Rifle in a middle of a firefight usually cost you a life.