The Rocket Launcher (often abbreviated as RL) is a weapon that has appeared in various incarnations in all of the Unreal series. With the Rocket Launcher equipped, hovering the crosshairs over another player for a brief amount of time will cause the Rocket Launcher to "lock on." While locked on to a player, rockets fired will curve slightly towards that player. However, this lock-on attack can usually be easily avoided.

The Rocket Launcher in Unreal is called the Eightball Launcher. This is due to the ammo it uses, Eightball rockets, and is based on the eight ball in pool.

An Eightball can in the open position

The Eightball Launcher uses cans of 12 Eightballs for ammunition. When you get close to a can, its lid opens and five bars land on the base. After that, the lid floats down and rests on the ring of bars. As one can provides 12 Eightballs, it's a valuable pickup. It's a common item in the single player campaigns. There are usually cans of Eightballs before and after a boss fight, especially against a Titan. In the multiplayer map DmMorbias, Eightball cans are the only ammunition available.

Unreal - Return to Na Pali has the same Eightball Launcher as Unreal does but it also adds a standard UMS Rocket Launcher to your arsenal.

A Rocket Pack of Return to Na Pali 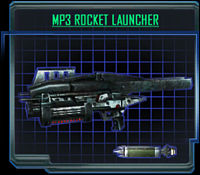 Nothing beats the primary fire mode for accurate, long-range devastation with significant splash damage. The alt-fire drunken missiles are wildly unpredictable, but are good for saturating an area or providing suppressing fire.

The Shark of Unreal II is a Rocket Launcher which is more similar to the RTNP Rocket Launcher. It can only load one rocket at a time. The Rocket Launcher, sometimes called MP3 (Man Portable Rocket Launcher Type 3) is useful in medium range as it has a very big splash damage radius but is somewhat slow and easy to avoid at long ranges. The Shark is a favourite weapon of the Heavy human class in Unreal II. 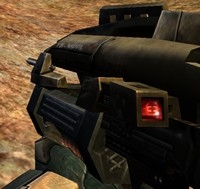 Primary Fire
Unguided rocket projectile that consists of four small rockets.
Secondary Fire
Rocket breaks into four smaller projectiles that fly around drunkenly if are not locked when secondary fire button is released. Holding down the secondary fire button and moving the crosshairs over enemies before release will lock each rocket to a target, one at a time.
Techniques
When using the Rocket Launcher against a tough enemy like a heavy-armored troop, if you're pretty sure you can hit him with the first trigger, then use it so you can pump out ammo as quickly as possible. Locking on becomes more useful at longer ranges, especially as multiple weaker enemies advance on you. In Unreal II your character wears a heavy suit of power armor, so rocket jumping is not possible.

The ammo for the Shark, Rocket Launcher of Unreal II, is called a Rocket Pack as well. They only contain 5 rockets, up to 40 maximum. Rocket Packs are very rare in the game and the main supply for rockets are Sharks, either dropped by enemies or as pickups. So the Rocket Packs are very useful, as rockets deal loads of damage and quite quickly use up ammo. You need 8 Rocket Packs to get the full backpack of rockets. The Rocket Pack looks like a holder for three rockets (two are behind the first three and not shown), each of which have 4 warheads.

Primary Fire
Slow moving but deadly rockets are aimed at opponents. Trigger can be held down to load up to six rockets at a time, which can be fired at once. Multiple rockets are fire in a flat, horizontal spread unless the secondary fire button is pressed while they are loading. This will cause them to fire in a tight spiral formation.

Secondary Fire
Grenades are lobbed from the barrel. Secondary trigger can be held as well for up to six grenades. If the primary fire button is pressed while the grenades are loading, they will be fired in a tight cluster instead of spread out.

Tactics
Keeping this weapon pointed at an opponent will cause it to lock on, and while the gun is locked the next rocket fired will be a homing rocket. Because the Rocket Launcher can load up multiple rockets, it fires when you release the fire button. If you prefer, it can be configured to fire a rocket as soon as you press the fire button down, at the expense of the multiple rocket load-up feature. This is set in the Input Options menu.

A Rocket Pack of Unreal Tournament

The Rocket Launcher of Unreal Tournament uses Rocket Packs almost the same way cans of Eightballs are used in Unreal. Rocket Packs, however, no longer animate and are slimmer. They are a little more valuable, as rockets of Unreal Tournament deal somewhat more damage than Eightballs. They are very common in multiplayer maps, as they are fired quite rapidly, in a "spammy" way.

The Rocket Launcher of Unreal Tournament 2003 uses Rocket Packs as well. They are even more valuable than the other ammo versions, as the Rocket Launcher fires rockets extremely rapidly, and each Rocket Pack only gives 9 rockets, up to 30. That means you need more than 3 Rocket Packs to get the full inventory of rockets. They are common in maps, so they shouldn't cause too many problems.

These Rocket Packs have a small, usually unnoticeable warning written on them: WARNING: IF YOU TOUCH THIS THEN YOU HAVE A PROBLEM.

The Trident Tri-barrel Rocket Launcher is extremely popular among competitors who enjoy more bang for their buck. The rotating rear-loading barrel design allows for both single- and multi-warhead launches, letting you place up to three dumbfire rockets on target. The warheads are designed to deliver maximum concussive force to the target and surrounding area upon detonation.

Primary Fire
Fires a single rocket.
Secondary Fire
Loads up to three rockets which are fired in a flat spread, or can be fired in a cluster by pressing the primary fire button while loading.

Each year, more accidental deaths are caused by the Trident Tri-barrel Rocket Launcher than in vehicular accidents and extreme sports combined. The kill radius for its standard dumbfire rocket is surprisingly high by design -- so accidentally firing upon a nearby wall, or a nearby enemy soldier, can be quite fatal for the operator. The alternate fire adds to this suicidal lethality by loading and firing up to three rockets at once, in a spread, tight spiral, or lobbed like grenades. Regardless of the grim statistics, veteran soldiers still consider the 'old 8 ball' the most expedient way to put explosive ordnance on target.

Primary Fire
Fires a single, non-seeking rocket.
Secondary Fire
By default, this fires rockets in a spread formation. Tapping Fire once while loading will change to a spiral, while tapping it twice will release grenades. Tapping it a third time will restore the default spread pattern. 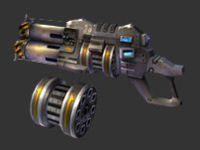 The Rocket Launcher of Unreal Championship is supposed to be identical to the one of Unreal Tournament 2003, except for the mesh. The weapon is one of the few UC weapons that also have ammo with a different mesh than in UT2003.

Fires up to three rockets in a flat spread. It can also fire them in a tight cluster by pressing the primary fire button while they are loading.

The Rocket Launcher's rockets fly straight, do a lot of damage in a direct hit, and have a fair-sized splash damage radius. (Because of the splash damage, Rocket Launchers are less than ideal for close-range fighting and are notorious for causing suicides in this situation.)

Since Rocket Launchers are the most powerful standard weapon except a sniper and they have a reasonably fast reload rate and a large splash damage radius (hence the RL is called a "spammy" weapon), they are a favorite of new players. Because it's much more rarely used by advanced players, the Rocket Launcher is often found opposite the Flak Cannon in Capture the Flag, Double Domination, and Bombing Run maps, and in either wide-open or very tight places in Deathmatch or Domination. The theory behind the latter locations is that a weapon is most balanced if it is placed in a location where it is least useful; since the RL is usually considered a mid-range weapon, these locations make sense.

Use in Deathmatch and other Gametypes