The Grenade Launcher is a weapon that appears in Return to Na Pali, Unreal 2, XMP, and Unreal Tournament 2004. 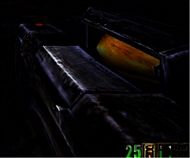 One of the three Return to Na Pali's exclusive weapons. A UMS Grenade Launcher, its first appearance is in Neve's Crossing. Grenades can deal 80 damage.

Primary Fire: Throw a grenade which bounces through the environment. It will explode after three seconds or just on contact of a living being.

Secondary Fire: Similar to the primary fire, the grenade here never explodes by itself (it will pass through enemies). It can only be activated by pressing the secondary fire's button again. In the meanwhile you can also throw a normal grenade after throwing the alternate one. Detonating this latter bomb causes both grenades to explode. The secondary fire is often used for detonating the grenade sooner than the primary fire grenade would, making it somewhat useful at close range. 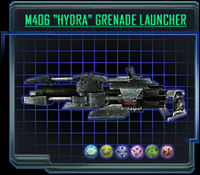 The grenade launcher is an amazingly versatile and effective piece of military hardware, perhaps the best all-around portable weapon in the Terran arsenal.

Unreal 2's Grenade Launcher, the M406 Hydra, is named after the many-headed Lernaean Hydra due to its ability to use multiple 40mm grenade types. At the beginning of the game Dalton only has access to explosive fragmentation grenades, but he will collect the other types along the way. Regular fire launches the currently loaded grenade, whose explosion can be delayed by holding the trigger for a short while. Alternate fire cycles through grenade types. 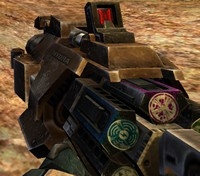 In XMP the Hydra works a little bit differently in that the different classes carry simplified versions of the weapon that can only launch two grenade types. Regular and alternate fire are dedicated to these two types. The Ranger has access to the Frag and Smoke types, the Tech has EMP and toxic, and the Gunner has Incendiary and Concussion.

Easily one of the most diverse weapons in current use, the Grenade Launcher can fire up to eight grenades at a time, either seeding an entire area for later detonation, or directly targeting enemies. Lined with electrostatic emitters, each grenade adheres to both enemy vehicles and infantry, the detonation of which lies completely in the hands of the weapon holder. When employed with creativity and timing, the Grenade Launcher can be a very powerful weapon.

Introduced in UT2004 for the Onslaught gametype, Grenade Launchers (weapon slot 7) shoot out projectiles which will bounce or roll until they lose momentum or until they encounter an objective, player, or enemy vehicle. Upon encountering one of these obstacles, the grenades will stick to that object and explode when the player who shot the grenades presses Secondary Fire, or when that player dies. An interesting application is to attach a grenade to a teammate (if friendly fire is off) and then have that teammate go on a suicide run into the enemy base. The exploding grenade will not hurt the teammate, but it will hurt whoever is around him or her.

An extension of the above tactic is to fill a vehicle with grenades then place it in a highly visible position. When an enemy spots the vehicle and commandeers it, detonate the grenades to kill him. A word of caution, though: this is a VERY dirty tactic and should not be used against human players (or prepare for heavy verbal attacks). Another possible method is to fill a Manta with grenades, then jump in and go on a kamikaze run.

One of the most effective weapons against stationary targets, and mobile as well, if wielded correctly.

The grenade launcher is the standard canister gun loaded with explosive ammunition. The primary fire is a grenade which bounces off hard surfaces, and explodes either by proximity detection or when its timer runs out. The alt-fire shoots a mine that sticks to the first surface it hits. These mines detonate whenever they are within range of another explosion.
The mines can also be detonated by holding down alt-fire after shooting the grenade, then pulling fire. It's possible to build traps by laying a group of mines, then firing one last mine and waiting for an enemy to walk through the area before detonating. Mines can also be detonated in the air, though this does less damage because they are not yet fully armed.

Unreal Championship 2
This section is a stub. You can help Liandri Archives by expanding it.

Shoots small balls that bounce around for a few seconds and explode when touched. Its secondary shoots a mine that is remote triggered.

There are some other weapons capable of launching grenades.

The Assault Rifle in UT2003 and UT2004 launches grenades at a speed (distance) depending on the amount of time the alternate fire trigger was held. These grenades use different ammo than regular fire.