The Mine Layer made its first and only appearance in Unreal Tournament 2004. The gun was made to assist in playing defensively on Onslaught maps. It occupies weapon slot 3 together with the Bio Rifle, which is usually not found in Onslaught maps, though. Every player can have 8 mines in play at a time. If (s)he launches another mine, the oldest mine explodes harmlessly. All mines also explode harmlessly when the controlling player dies.

Other kinds of mines do feature in other Unreal games. For instance UC2's Ripjack can lay a kind of mine, and XMP features deployable Land Mines. 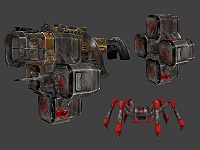 Deriving technology from Izanagi Corporation's Micro-spy military line, the minelayer is a deadly combination of cutting-edge high explosives, A.I., and robotics. Carrying thermite encased within it’s fragmenting Duranium shell these drones will sit quietly until a vehicle is within range, then charge and detonate on contact. If an on-foot enemy is within range, the mines will chase them down and leap onto them, detonating. Alt-fire activates a guidance laser from the Minelayer itself, causing all launched drones to flock toward the painted point. Although each clip can only hold four drones, the minelayer is deadly for both infantry and vehicles alike.

Launches Spider Mines onto the ground. The Mine Layer is able to control up to eight mines at the same time and will stop firing when this limit is reached. New spider mines can be layed when at least one of the existing mines is destroyed.

A laser that allows you to "herd" your spider mines into strategic positions.

The Mine Layer was to feature in Unreal Tournament 3, but isn't in the final game. Instead, some maps feature a Spidermine Trap, which can be found as a pickup and also be deployed by the Necris Nightshade vehicle.