Although there have been no confirmed sightings of the Nightshade, recon teams claim to have encountered an unknown "camouflaged support vehicle" in the field.

These teams describe seeing minefields and other traps materializing out of thin air in battles with the Necris. Most likely, the Nightshade is surrounded by a cloaking system that permanently bends light, similarly to the temporary cloaking device that Axon Tech teams sometimes deploy to infantry captains.

More research is needed, and ARC scientists would pay dearly to get their hands on this technology. 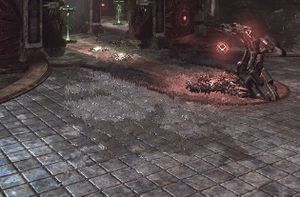 The Nightshade's main purpose is to drop Deployables at strategic locations. A single Nightshade can maintain up to two Spidermine Traps, a Stasis Field, an EMP Mine and a Shield Generator at the same time. To deploy an object, the Nightshade needs to uncloak first. Additionally, the Nightshade has an energy beam weapon similar to the Link Gun alt-fire, which can heal power nodes and other vehicles. The beam also lightly damages opponents. The depolyable ammo of each type replenishes a period of time from when it was last used, if you keep the nightshade in one peice that long.

While cloaked, the Nightshade is only visible as slight distortion and can easily run over unwary infantry. In safe areas it is recommended to uncloak, though, as the Nightshade can move much faster then.

Going against the Nightshade

Make sure you don't let the Nightshade place its deployables. Once they are out, most of them will be around for quite some time.

A Nightshade needs three AVRiLs to be destroyed. Since it's relatively slow and weakly armed, other weapons like the Rocket Launcher or Flak Cannon can be used as well. A kamikaze Scorpion or Viper can take out a Nightshade in one shot regardless of armor if it hits it.

If you play on maps that feature the Nightshade on the enemy team, you should switch the world detail in your settings at least to 2, otherwise the Nightshade's distortions will not be rendered, causing it to be completely invisible.