The Minigun is a weapon in Unreal, Unreal Tournament, UT2003, UT2004, and UC. In Unreal II, UC2 and UT3 the Minigun's function has been taken by the Combat Assault Rifle, Stinger and the Stinger Minigun respectively.

The Minigun has remained more or less unchanged throughout the games: Primary fire shoots out a fast stream of inaccurate bullets that do light damage, while secondary fire shoots out more accurate and damaging bullets, but the rate of fire is severely dropped. In Unreal and Unreal Tournament these firing modes are swapped. 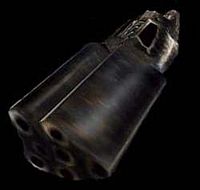 The Unreal minigun features two tri-barrels that spin with each other. It uses the same ammunition as the Automag.

Primary Fire
Bullets are sprayed forth at a medium to fast rate of fire and good accuracy.

Secondary Fire
Minigun is twice as fast and half as accurate.

Techniques
Secondary Fire is much more useful at close range, but can eat up tons of ammunition.

In UT and also in Unreal the Minigun's actual firing rate greatly depends on the server's current tick rate or offline frame rate. 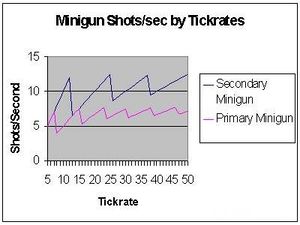 Minigun Diagram
The minigun can be hard to use due to tickrate.

The minigun fires more or less bullets depending on the tickrate of the server. A tickrate of 20 will give you around 10 bullets per second, while increasing to 25 could theoretically give you 12.5 bullets per second. a 25% increase in damage. This is a theoretical value. The tickrate is not perfect on the server, it will vary a bit. But it's interesting enough as it shows on the picture. Different tickrates can be used to manipulate the power of the minigun. This is one of the reasons tickrate should stay at a default of 20 to avoid minigun being overpowered.

The Schultz-Metzger T23-A 23mm rotary cannon is capable of firing both high-velocity caseless ammunition and cased rounds. With an unloaded weight of only 8 kilograms, the T23 is portable and maneuverable, easily worn across the back when employing the optional carrying strap. The T23-A is the rotary cannon of choice for the discerning soldier.

In UT2004 the Minigun no longer imparts momentum to target players, but deals out a bit more damage than the UT2003 version. The momentum was removed to prevent lockdown.

Rapidly fires unprocessed Tarydium crystal shards. This mode is like traditional miniguns, with hitscan shots and lots of random spread. The first shots fired have slightly longer delays between them, corresponding to fire rates of about 5.8/s, 6.3/s, 7.0/s, 7.7/s and 8.7/s respectively. The full fire rate is reached after about 0.72s. (0.79s for consoles)

Fires large, visible chunks of Tarydium. This mode resembles the original Stinger: it's projectiles are certianly not instant hit, so you will have to lead your target a bit. However, it does have a fair bit of knockback, as well as the ability to pin opponents to the walls with a killing shot. As these shots follow a perfect line with no spread, they are useful against distant stationary or slow targets.

Replacing the Minigun in this year's Tournament, the 'Stinger' is actually a Liandri mining tool converted into military service. The Stinger fires shards of unprocessed Tarydium crystal at an alarming rate, raking opponents with a storm of deadly needles. The alternate fire shoots larger hunks of crystal that can knock back an opponent, sometimes even pinning them to walls. 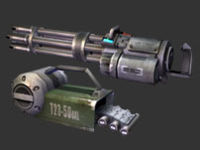 This incarnation of the Minigun is similar to that of UT2003. Its mesh is somewhat different though, although the ammo pickup remains the same through UC, UT2003 and UT2004.