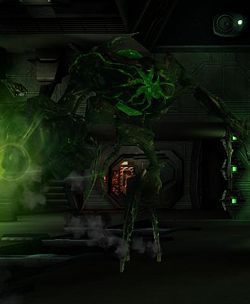 Tosc are noble warriors who serve their masters in battle. But when there were no more masters to serve, their scientists hid their DNA within that of another race, and forged the artifacts against the day they might once again be needed. The race that contains their DNA is still with us today. The Kai.

The Tosc are an ancient amphibian race. It is unknown whether their homeworld is Dosha, Hsskor, or Tussja. They appear in Unreal II, in the last mission, The Dorian Gray.

Tosc are about 15 feet/4.2 meters tall, and have dull greenish slimy skin. They have a single emerald green eye shaped like a hurricane, and spindly legs with two long, claw-like toes. Their right arm is spindly and has three long claws, but their right arm has a heavy, six-fingred hand with glowing green lights on the back of it. This "hand" can be shot off and used as the Tosc Cannon.

In addition to the Singularity Cannon, which fires a mini black hole, sucking in everything alive and killing it instantly, Tosc also have a beam that they fire out of their eye and can also use their right hand.

Tosc are nearly immune to almost all hand-held weapons. The best way of taking down a Tosc is to ignite them with an incendiary grenade, or hit them with a few toxic grenades.

This will cause their left hand to fall off. Grab it, and you can use the Singularity Cannon, killing the Tosc in one shot. There is no other way of thoroughly killing a Tosc, as they appear to be invulnerable after losing it's hand or having an incredible amount of hitpoints. The heat of a star, though, can destroy them. There might be other ways of destroying them, like nuclear strikes, shockwaves or ion plasma usage, but none of these are available in Unreal II.