I want to play all the way through Unreal before starting RTNP, so I'm not sure, but doesn't the latter also have a female entering vocal (actual audio) logs throughout the game or something? Retodon8 11:49, 13 August 2007 (EDT)

In RTNP you can choose to play as a man or a woman. The voice acting changes depending on that. However, like Unreal 2, RTNP contains some canonical inconsistencies and it is unknown to what extent RTNP has been accepted into the official storyline. Unreal 2 mostly has, obviously, because of it's inclusion in the timeline. --Sir Brizz 13:24, 13 August 2007 (EDT)

Article quote: "When she attempts to escape several days later, the Bodega Bay fires on her craft, which dodges the missile, and it hits the Bodega Bay, causing its own self-destruction."

So what is hitting the Bodega Bay? I doubt it was "her craft", as that wouldn't have been good for P849 herself, but if it's the missile, how come it suddenly does a 180 and hits the ship that launched it? Maybe it was heat-seaking and she lured it into the BB? I read "its own self destruction" which implies a self destruct safety measure was somehow started by the missile impact... right? Without having played the game I can't figure out what happened through that quote. Could someone rewrite it to be more clear? Retodon8 08:29, 15 August 2007 (EDT)

Soooo... I've come up with some more of the speculation. What do you think:

By default, if you have UGold and choose any other type of character than UPak one you will be set as Carter. So depending on this I will say that the Prisoner 849 was Carter; Maybe it was Gina, but let's say it's Carter.

So, Carter Kolodenko was first an UMS prisoner (#849), being sent to a Prison Moon (which one?). Notice the Vortex Rikers sign on his T-Shirt. The texture names reveal that it is actually the Vortex Rikers logo, that's a fact. So Carter must have done something really awful to get himself in that kind of a state.

In 2215, Carter escaped, killed the Skaarj Queen and started the Human-Skaarj wars. That's mighty, don't you think? No normal guy could do all of that. Even more, he almost escaped Na Pali - but think how mad UMS were! Carter did something to get himself a prisoner (maybe killed someone?), and now he started a war against the Skaarj! But the guys on UMS Bodega Bay weren't idiots and figured out that Carter is too mighty to be simply killed (sent out of the airlock without a suit), and can be used for missions without risking their own marines. Just like other people with the Nexus missiles later, UMS Bodega Bay guys sent Carter on Operation Talon Hunter in order to get a secret weapon log. The weapons might be good for stopping the Skaarj - at least Carter will do something for NEG.

But Carter was even more mighty and managed to escape Na Pali again, and even destroy UMS Bodega Bay. But the shuttle he used, as earlier, didn't have too much fuel - after all, it was only used for flights to UMS Bodega Bay. Now imagine the rage of UMS when they got their hands on Carter the third time! The first crime, Human-Skaarj war, killed Marines, destroyed warship... But again, UMS saw that killing Carter wouldn't give anything for them. So again Carter was sent to a prison. But this time not to a moon, but to Alleria Penal Colony. That was somewhere around 2217. 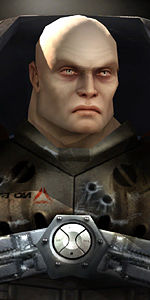 Now look at this... Sounds familiar? Yeap. Carter Kolodenko was kept in Alleria for quite a long time, along with the other starting Juggernauts. Can you see the similarities? Carter had a mechanical leg and was bald. As time passed, Juggernauts copied everything from the first colonists, including the mechanical armour (that led to the heavy suits). To make Carter less of a threat to the UMS (he could escape from there too!), they gene-boosted him. That proved to be a good way to manage the criminals and onwards they all were gene-boosted. Of course, there's not much of use from Carter when he's just mining iridium, so he probably got an offer to join some kind of underground tournaments that were before Liandri Grand Tournament - those were even officially mentioned. Or maybe he himself attended the Tournament as well - gene boosting probably prolongs the living time, as the age of Juggernauts is officially counted in a format like that: "34 years RT": maybe that's the time since the gene boost?

Then Nikolai Kolodenko, AKA Frostbite, was born (there's a chance that it's Carter after all, but not very likely). See how they are both similar? They're even both bald. Nikolai got an offer to attend the now Liandri Grand Tournament, and having almost the same might of Carter, he managed to get well known. Gorge, however, was somewhat stronger, therefore was the leader of the group. Now Nikolai still tries to get a high place in the Tournament, and maybe a few years later we will see him as the champion.