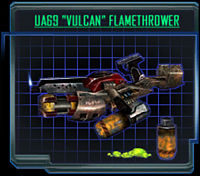 This is the most lethal short-range weapon in the Terran arsenal — you can incinerate entire squads of enemies at close quarters.

The UA69 "Vulcan" Flamethrower is a unique weapon that appears in Unreal 2. It is preferred by Urban Assault Units of the Terran Heavy Infantry as well as Izanagi Heavy Ghost Warriors and Heavy Liandri Angels. It uses canisters of napalm for ammo and is capable of setting enemies on fire. The Araknids are known to be extra vunerable to this weapon. The Vulcan Flamethrower is first found by John Dalton on Hell during the Unreal 2 single player campaigns.

Primary fire
A jet of flaming gas. It deals a lot of damage, but uses ammo very quickly.
Secondary fire
A spray of unignited napalm which will stick to almost any surface, and which can be ignited by several of other Unreal 2 weapons. It is very unstable and even if not ignited, it will burst into flames after a short while by itself.

Techniques
The weapon is only useful in close and close-to-middle range. But it deals so much damage that it will burn anyone in seconds. Unfortunately, it uses a lot of ammo and you will need to reload very often.

Against weaker enemies, preserve fuel by tapping the trigger to fire quick jets of flame. Enemies are completely blind to seeing napalm so don’t worry about whether your secondary fire trap will work based on that... it will. Try getting enemies attention, then retreating and trailing napalm to ignite when they follow you into it. This works particularly well when you find yourself outgunned; run out a door into a hallway backwards, laying your trap as you go. You can use Trigger 2 to attack enemies from above that are too far away to normally attack with a Flamethrower, but it's rarely useful.

On Hell, the Flamethrower is a very useful weapon against the Araknids, as they can only use melee attacks. Unfortunately, there is not much ammo for it in that level, considering the ammo usage speed, and it is hard to see if the enemies are already down when the Vulcan is in use. Later in the game, the Flamethrower can be used for distracting enemies and draining their health, as when they get on fire (but are not taking damage from the Flamethrower any more), they panic for a short time and their health is drained for 5 seconds. The damage they receive varies depending on the game difficulty level. Other weapons, such as the Shotgun and the Drakk Laser Rifle, can set enemies on fire as well.