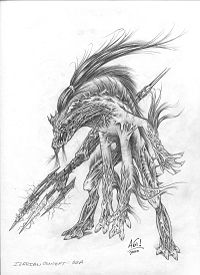 Izarian concept art
This article is a stub. You can help Liandri Archives by expanding it.

Izarians are intelligent aliens that make an appearance in Unreal 2. Friendly characters in the game sometimes refer to them as "space monkeys".

Izarians are humanoid, with four arms and a dark blue skin. Parts of their skin seem transparent, showing lighter pieces of skin that glow a lighter shade of blue, perhaps because of their blue blood. They have long heads and mouths filled with sharp teeth. Despite their aggressive appearance, Izarians aren't particularly tough.

The Izarians used to form a small empire that enslaved other races to do their bidding. Somewhere before Unreal II begins, the Skaarj enslave the Izarians themselves and use them as warriors. For this purpose, the Skaarj put a limiter on their weapons, called the Energy Rifle, or Shock Lance, to make controlling them less dangerous. The weapon is based on ASMD technology, suggesting earlier contact with Humans. Izarian troops don't wear any armor. Small groups of Izarians accompany one Skaarj commander in the battlefield. Izarians are kinda like the Krall from Unreal 1 in a way. The only diffrence is that they use alt fire with there Shock Lances (Which sucks when it hits you/player/John Dalton) and they don't guard anything and they mess with stuff like cameras from the first Sanctuary mission. The good thing about facing Izarians is that I think they have low health because you can kill them with one shot of the alt fire with the CAR, Also knowned as the Combat Assault Rifle.