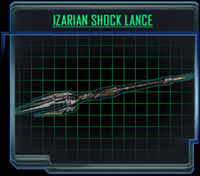 The Energy Rifle, or Shock Lance as it's dubbed by Isaak, is a weapon used by the Izarians in Unreal II.

The weapon was created by either the Izarians themselves or the Skaarj who enslaved them. Either way, its design on ASMD technology used in the Shock Rifle. Unlike the Shock Rifle, it quickly fires dual energy bolts which can bounce off surfaces, depending on the angle. The alternate mode fires a more powerful bolt which creates an electro-magnetic pulse (EMP) that fries electronics, a feature not found in regular ASMD technology.

The Shock Lance is the first Alien weapon you get to use in the game. In Unreal II the rifles equipped by the Izarians have been made less powerful by a limiter. The rate of fire hasn't changed, but the individual projectiles don't do very much damage. Throughout the story, Isaak manages to remove the limiter supplying John Dalton with a proper weapon for later missions.

The first person view of the Shock Lance.

Primary fire
Rapidly fires two slow-moving energy bolts at a time that pack a fair punch (after the limiter is removed by Isaak after the Swamp mission) and bounce off walls.

Tactics
Note that until your mission on Hell, you're using a Shock Lance with a limiter. The primary fire mode will be pathetic and it is not recommended to use it until Hell; even the Dispersion Pistol is more useful until that point. From then, the primary fire energy bolts are surprisingly powerful, but very slow moving making it hard to hit most enemies. If you do use them, fire at a fairly close range or against slow targets. Theoretically, you could use the wall-bouncing ability to target enemies, but even then the shots tend to ricochet into some strange places since they’ll bounce off several surfaces before they dissipate. Note that if you fire the dual bolts straigth, they will simply stop moving after hitting a wall and will do a mini-explosion after that. To make it bounce off walls, the bolts must hit a surface by 5-70°, as anything near 90° will cause it to stop moving (as oppsed to the Ripper's ability to chop the owner's head off).

The secondary fire can be very useful overall. Here's what EMP can do:

It is easy to sap away huge amounts of shield energy and sometimes even small amounts of health from yourself if an EMP goes off close enough to you, so make sure to give yourself some space for it to burst.

In XMP the regular version of the rifle is carried by the Ranger class. Slightly modified from the single player game, it has an ammo capacity of 120, or 150 if it has a full clip (30 ammo) already loaded. The EMP feature makes it especially useful against vehicles and deployable turrets.