The Shock Rifle is also known as the ASMD in early games. It is an energy-based weapon that fires either a hitscan bolt or a core (an "orb" of energy which travels across the map until it strikes a solid mass). In addition, you can shoot a bolt at a core to cause a "shock combo", a massive explosion which does considerable damage to anything within its blast radius. 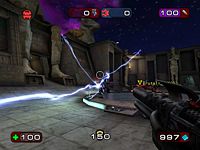 The Shock Rifle shoots a bolt or a Shock Core.

The ASMD Shock Rifle has changed little since its incorporation into the Tournaments. The ASMD sports two firing modes capable of acting in concert to neutralize opponents in a devastating shockwave. This combination attack is achieved when the weapon operator utilizes the secondary fire mode to deliver a charge of seeded plasma to the target. Once the slow-moving plasma charge is within range of the target, the weapon operator may fire the photon beam into the plasma core, releasing the explosive energy of the anti-photons contained within the plasma’s EM field. 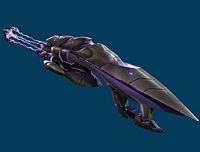 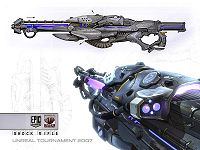 This incarnation of the Shock Rifle retains its original functions. It fires a laser beam and fires a shock core. Developers have stated that the Shock Rifles rate of fire has been slightly decreased and damage increased to recreate the imposing feel of the Unreal Tournament version of the shock rifle (This means it does more outright damage which is bad for you people who already don't like it) It has been observed in coverage of UT3 that the Shock combo not only causes explosion damage but causes a vortex effect which sucks up ragdolls and gibs them and appropriately spits the gibs out into any direction.

The Energy Rifle or Shock Lance is a weapon used by the Izarians in Unreal 2. It was created by the Skaarj who based its design on ASMD technology. Unlike the Shock Rifle it fires dual energy bolts which can bounce of surfaces. The alternate mode fires a more powerful bolt which creates an EMP field, a feature not found in regular ASMD technology.

The Hellbender has a turret that can launch skymines into the air, which are similar to Shock Rifle cores. If the turret operator launches multiple skymines and fires a beam into any of the cores, the Shock Combo will almost immediately connect to the closest core, causing it to combo and connect to a nearby core as well, and so on, causing a big explosion in a connect-the-dots fashion, similar to how UC2's Shock Rifle functions.

The Leviathan in Unreal Tournament 3 has a secondary turret which uses ASMD technology.

As revealed to the public by David Münnich, T. Elliot Cannon (Myscha the Sled dog) stated in a conversation with him that the name "ASMD" is derived from a movie phrase saying And Suck My Dick. Although the full phrase never features in any of the games, this can be considered the official meaning. Funnier, less provocative names thought of by fans include: Anyone Seen My Dog, Automatic Spectrum Matching Device, Atomic Shock Mechanism Device.