Jump to: navigation, search
The Takkra 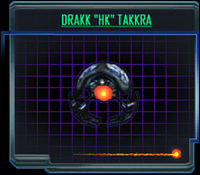 I figured out a control mechanism for those floating orbs you found on Na Koja Abad. Your primary fire launches the orb at an enemy so it circles around him and shoots at him. The Alt-fire is a defensive mode - the orb will circle you and try to shoot down any inbound projectiles.

The Takkra (also known as Hunter-Killer) is a weapon found on Na Koja Abad in Unreal II. The weapon is based on Drakk technology. It is very unique, as when it is activated, it works on its own. Takkras were invented by the scientists of Izanagi Corporation, after finding a Drakk structure on Na Koja Abad. Another weapon that was on research there was the Drakk Laser Rifle. The Takkra looks like a small ball but is useful and fun.

The first person view, the hologram and the mesh.

Primary fire
When the crosshairs lock on a target (the Takkra targets enemies automatically), the Takkra is released and will circle the prey firing energy bolts that do minimal damage until one of them dies or the prey manages to hide behind a door or in a narrow corridor. If the Takkra manages to kill the enemy, it explodes, so it is not possible to get the ball back when activated.. The Takkra can also disrupt the enemy's fighting ability.
Secondary fire
The Takkra is launched in a defense mode. It will circle you and automatically attack any nearby enemies that tries to attack you. Also, it will shoot most projectiles out of the air before they can hit you. In this mode the Takkra keeps following you until someone destroys it (or the level ends).
Tactics
Takkras are definitely spectacular to watch and can be useful, but they are also very ineffective. Takkra shots do so little damage to enemies that even after repeated hits it hardly amounts to much. For example, it takes at least 25 hits for a Takkra to kill a medium-armored Skaarj on Medium difficulty, making it slightly weaker than the primary fire blasts from the Dispersion Pistol. That makes the first trigger somewhat useless in usual fights; but when fighting bosses, it can be quite a good health drain for the opponent. The secondary fire is somewhat more promising, because the Takkra can circle you potentially forever and its ability to shoot projectiles out of the air is fairly effective. Also, it can be launched before the start of a battle so you won't have to launch it and then switch back to another weapon while possibly being fired upon. Overall the secondary fire is more effective and lasts longer, but even then it won't be much of help. It is still useful as a defensive device before boss fights.