For the pistol in Unreal Tournament, see Enforcer.

The Magnum is the most powerful sidearm out there. Best for medium range targets, when you’re too far away for the shotgun, but too close for the sniper rifle.

The P400 "Avenger" .50 Caliber Semiautomatic Pistol or the Magnum Pistol (Aida's own pistol is called Grace) is a weapon seen only in Unreal II and XMP (hence in UTXMP mod for UT2004 as well).

In Unreal II, the weapon is lent to John Dalton by Aida for a few missions. Surprisingly, enemies use this type of weapons as well (the medium class Liandri Angels, Izanagi Ghost Warriors and Marines), so finding ammo is less of a problem than it might sound first, but is still problematic. 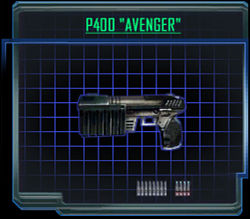 In Unreal II XMP, the Magnum pistol is available for the Light class. It's a lot weaker than in the single player game.

The Magnum pistol works absolutely differently from what it would look. Despite its size and overall look, this weapon is absolutely lethal. It can deal very much damage, usually killing any easier enemy from the first 2 primary shots or one alternative thanks to the ammo it uses. It is .50 caliber explosive ammunition. Though no explosion can be visually seen, but it seems that the bullets explode a short while after hitting a target and immediately incinerating the enemy's internal organs. For that manner, this weapon is thought to be the primary preference of assasins.

Primary fire
A standard single shot. Very accurate and very powerful. Enough to eradicate an injured or a weak opponent. Due to being a very accurate weapon, it might be hard to hit the opponent when in a difficult situation.
Secondary fire
A three-round burst with an even bigger punch and no penalty in accuracy. All of the three shots are fired extremely quickly and is usually not possible to avoid the other two shots after getting shot by the first one. This is sure to take out even armored opponents and deal a nice amount of damage to the bosses.
Techniques
In most single player levels, .50 Pistol ammunition is very limited, so keep that in mind. A headshot with this kills most weaker enemies; a couple bursts does wonders on the really tough ones. The worst thing of the Magnum Pistol is its clip capacity, as it holds only 9 explosive bullets, therefore enough only for three quick bursts, so keep an eye on the ammo meter and reload when possible. The reload time, though, is relatively short - only 1.8 seconds.