For other versions of this map, see Recurring maps#Face.

This ancient asteroid has been converted to an Arena for the Tournament. It is highly dangerous due to aberrant gravitational properties and, of course, the snipers from the other team. 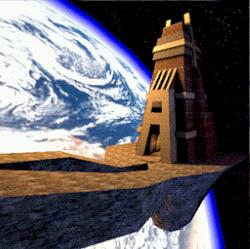 CTF-Face, also known as Facing Worlds or simply "Face", is a capture the flag (CTF) map from Unreal Tournament.

It consists of an asteroid and two towers, each belonging to each team. The central part of the Asteroid holds a Big Keg O' Health.

The bases themselves have the flag inside of them, and three teleporters guiding to three different spots. The lower level holds the Flag, a Shock Rifle and a Rocket Launcher. There's also a platform holding a Damage Ampifier.

With the entrance to each base being at the south, the west teleporter ends in a small chamber holding a Redeemer. The east teleport ends in another chamber, above the Redeemer chamber, this time holding a Sniper Rifle. And the third teleporter is placed right in the center of the lower area, and ends in the top of the tower, where players can find another Sniper Rifle and an Armor vest. Outside of the bases, players can find some weapons and ammo as well.

It is the most well-known map in the game, liked by many for its simple, symmetric design, and similarly reviled by some for its exploitative design that appeals to snipers and campers.

If you like to snipe, Facing Worlds must be a lot like dying and going to heaven. Two tall towers float lonely in space, separated by a very long, open crossroads. Trying to cross between bases is difficult, at best, and nearly impossible if the other team has even one good sniper.

The striking visuals may have helped make the map popular, but it is commonly cited for being extremely balanced, for having respawn points that funnel players back into the action quickly, and for also having plenty of positions for snipers.

Facing Worlds had a lasting affect on Capture the Flag map design to the present day, and was popular enough to be remade in Unreal Tournament 3. Fan versions of Facing Worlds can often be found where modders and first person shooters intersect.[3]

I had this idea after playing a great Unreal level.
I don't remember the Level name but it was a really popular DM level with 2 bases and a big bridge, and a tower on the side with a Sniper Rifle. I wanted this Sniping Tower concept with a different gameplay (Capture The Flag), the atmosphere also had to be completely different. So I did this weird asteroid shape in 3DSMAX and imported it in the Unreal Editor, making the towers was easy, but making the bots working right was by far the hardest and longest part of the work. The original design had lifts but the bots were really confused so I used teleporters.

The Skybox is interesting I think, I saw Pancho working on Koos Galleon and he was trying all kinds of tricks to make the skybox follow the motion of the waves. I realized a really cool effect could be done by just rotating the Skybox with a regular motion so I used the Skybox I made for the Ending Sequence of Unreal, since this one was really under-used (you could see it for 1 second and a half in the original game) so I imported it in Unreal Tournament and I improved it with new galaxies and Moon textures from Mike and Shane. The original Level was turning 4 times faster, but Cliff complained he wanted to puke so I had to change it to prevent players to be too distracted during the game. The effect could really make your head spinning and give you vertigo, making you wondering 'is the screen really moving or what ???'.
Making the Earth texture was a bit tricky as well, especially working around the 256*256 texture limitation. I wish I could just use the original texture I had, which was in 1024*1024, but if I did that it would appear very blurred for the 3DFX users and I wanted to give them the best visual experience possible. So I had to split the texture in 4 small 256*256 textures, which give a final result of 512*512. This is annoying to do because the bilinear filtering is blending the edges together. In the end the line between the different polygons is almost completely hidden but it's a painful process, I'm glad I didn't have to do this too much.
If you have a Savage2000, you'll have a very good Earth texture thanks to S3TC.

At this time I was really into Ambient/Techno like Future Sound of London excellent album: LifeForms. I chose the music to give the same feeling to the Level.
In the end, this Level is the most original work I did so far, with its unique gameplay and atmosphere. This Level was also very well received by the public since I had countless E-mails of people telling me how much they like it. I'm really proud of achieving such a result with this level.[4]