For other versions of this map, see Recurring maps#Morpheus.

LMC knew they had found an excellent arena at the very top of a newly constructed Galaxyscraper SuperStructure. Thanks to the modern miracle of super tensile solids, these three buildings reach a staggering 12 miles high at their pinnacle. The thin atmosphere and reduced influence of Earth’s gravity provide an interesting test of the tournament athlete’s ability to adapt and conquer in extreme environments. 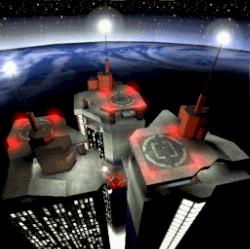 There's also, in the lowest level of the map, a broken road, with a small platform between the Northwest and South tower, holding no item. This road also has a jumppad propulsing the players back to the towers.