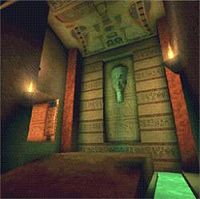 DOM-Sesmar, one of the Domination maps

Each team must locate and capture certain points in a Domination map. The more locations a team controls, the faster their score increases.

In this gametype, up to four teams duke it out for scoring the most amount of points by taking control of special control points spread among the maps. These points are marked with an X, if no team is taking it, or with a team's color and logotype, if said team is in control of it.

To take control of a location, players must touch it's control point. When they do that, said point's shape and color changes to reflect their team's symbol and color.

The winning team is the one with the most amount of points at the end of the time, or the first team which reaches the score limit.

For each control point taken, the team scores 1 point every 5 seconds. The more locations a team controls the faster their score increases.