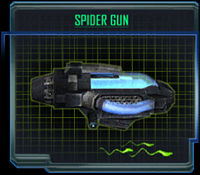 Oh, I had me some fun with this one. Turns out the araknids you ran into on Hell have a really durable biomass. I loaded some into this ejaculator tube. Primary fire spits out a sac that'll spawn a bunch of little araknids on your target. With Alt-Fire, the sac will grow until it splits and a big sucker pop outs and goes on the attack.

The Spider Gun, also known as Spore Cannon or Leech Gun, is a unique weapon seen in Unreal II. It is assembled by Isaak from the Araknid biomass found on Hell by John Dalton. The weapon is very weak, therefore it is rarely remembered and does not appear in the eXpanded MultiPlayer addon of Unreal II. It also has an odd combo move that is not too useful as well. The weapon is plain experimental, only used for show-off and doesn't have a single ammo pickup in the game. The internal name, Leech Gun, is left from the Alpha version where the gun was largely different (see the Trivia section). This is the second alien weapon that you find in the game.

Primary fire
Launches a spore pod that bursts on enemies, covering them in spiders. This does no direct damage, but it disorients them for a while as if they were on fire (except for heavy-armored troops and other enemies that are immune to disorientation) and slowly drains health.

Secondary fire
A quick trigger pull launches a small pod of slime that sticks to any surface and later, when an enemy comes near, bursts, launching a spore pod at them (identical in effect to the primary fire). Holding down the trigger and releasing after the same time as the Grenade Launcher's grenades launches a bigger slime pod that hatches after several seconds into a spider who crawls around and (theoretically) attacks nearby enemies.
Combo
You can fire a small pod of slime and shoot it with the primary fire to make it enlarge into the larger pod (the one that will hatch into a spider).
Tactics
This weapon can be used only if you want to escape from an enemy ambush or for show-off. The primary fire only does a few points of damage per second, and the light Araknid that hatches from the alt fire is not worth the time too. Enemies that are covered in spiders usually shout something funny though, and it's interesting to watch the light Araknid walking around. The Araknids usually attempt to attack the enemies they see, but their AI is faulty and they sometimes do nothing, and sometimes even attack their owner. Their low health makes them easy opponents, and the times it takes to grow one is too long to make the gun useful.