Oh, sorry. I suppose I was a bit unclear. What I meant to ask was if this page, in its current state, should be used as a template for the rest of the ONS maps, with the new lay-out combining the pickups and vehicles in 1 section in tables in particular. It could probably use a picture section showing the bases and control points, but that should cover it imo. --Kaithofis 20:35, 24 January 2009 (EST)

Yea, just like I've said, a featured article. Looks like we don't have anything better, so I

Me too. Although there should be a mention of the weapon lockers and "standalone" weapons like there's already for the pickups and vehicles somewhere. I've proposed a layout for this specific part in the Layout Guidelines talk page. Should I edit the page to show how it would look? --Neon_Knight 09:29, 27 April 2011 (CDT) 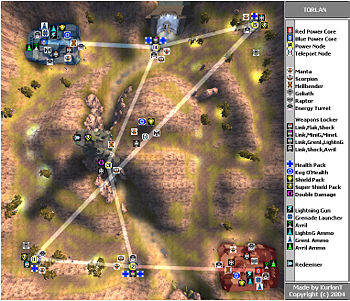 This is my best take atm. I don't think that it looks very good. It doesn't fit in with the rest, and it makes the whole secion look a bit messy. Feel free to copy and try to improve on this. --Kaithofis 10:12, 27 April 2011 (CDT)

There. I did edit your template above to show how it can be used. There's also the chance to use a separate table for the weapon lockers, but for some reason I think it wouldn't work. --Neon_Knight 12:02, 27 April 2011 (CDT)

I'd rather do something like the last table. It makes more sense not to group the weapon lockers' weapons. It's easier to read, doesn't take up too much space and fits in okay with the rest. Thoughts? --Kaithofis 14:53, 27 April 2011 (CDT)